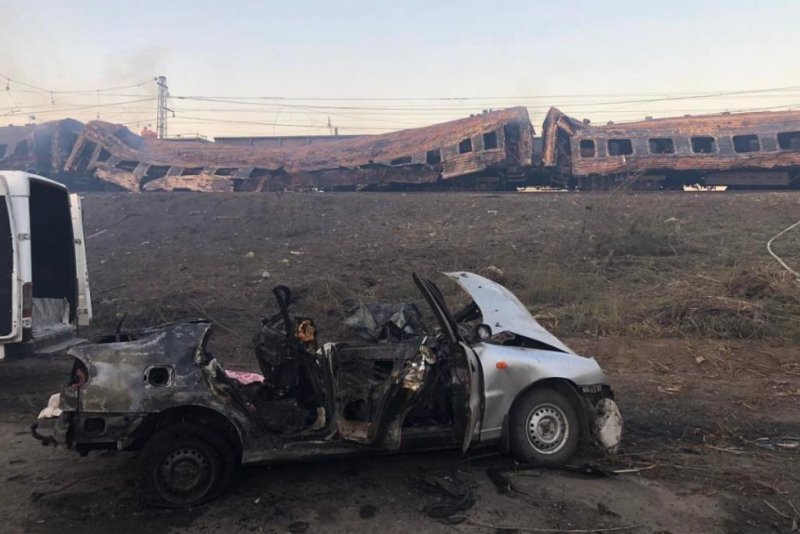 A Russian missile strike killed at least 22 people at a railway station in the Chaplyn, Dnipropetrovsk region of Ukraine as the country marked Independence Day and six months of war. Photo courtesy of Dmytro Kuleba/Ukraine Foreign Ministry/Twitter

Aug. 24 (UPI) -- A Russian missile strike killed at least 22 people and wounded 50 others Wednesday at a railway station in central Ukraine as the country marked Independence Day, according to Ukraine President Volodymyr Zelensky.

"Rescuers are working," Zelensky said in a video after the attack. "But, unfortunately, the number of dead may increase."

Wednesday's attack took place as Ukrainians marked the 31st anniversary of Ukraine's independence from the Soviet Union and the six month anniversary of Russia's invasion.

Ukrainian officials had expressed concerns about the heightened risk of Russian attacks this week with many cities banning large gatherings and ordering curfews.

"Terrorist Russia keeps killing Ukrainian civilians," Ukraine government official Dmytro Kuleba tweeted before the death toll rose in the train attack. "Terrorist Russia must be stopped now before it kills more people in Ukraine and beyond."

Terrorist Russia keeps killing Ukrainian civilians. At least 15 killed in a Russian missile strike on a train station in Chaplyne, Dnipropetrovsk region. As @ZelenskyyUa stressed at UNSC: terrorist Russia must be stopped now before it kills more people in Ukraine and beyond. pic.twitter.com/GSbMbrYEc2— Dmytro Kuleba (@DmytroKuleba) August 24, 2022

Ukrainian National Railways has not commented on Wednesday's strike, which comes after a rocket killed more than 50 people in April at a crowded train station in Kramatorsk.

The railway has provided a vital evacuation route for millions of civilians and transported 100,000 tons of humanitarian aid into Ukraine.

Earlier Wednesday, a rocket hit a house in Dnipropetrovsk killing an 11-year-old child, according to deputy head of the president's office, Kyrylo Tymoshenko.

Before both attacks, Zelensky stood among burned-out Russian tanks in downtown Kyiv Wednesday saying Ukraine was a nation "reborn" in conflict as he commemorated the country's independence and vowed to drive out Russian occupiers.

In addition to warnings about Russian attacks on Ukraine's Independence Day, Wednesday's deadly strike follows warnings about a possible revenge attack after Saturday's car bombing in Moscow that killed the daughter of a staunch supporter of Russian President Vladimir Putin.

Ukraine denied responsibility for the weekend attack, blaming it on "various political factions" in Russia.

World News // 8 hours ago
New York, Singapore top list of world's most expensive cities in which to live
Dec. 1 (UPI) -- There is a cost of living crisis in major cities across the world, and none are more affected than New York City, which is now tied with Singapore as the most expensive city to live in.

World News // 15 hours ago
President of South Africa faces impeachment over 'Farmgate' scandal
Dec. 1 (UPI) -- South Africa's president faces impeachment after an independent investigation determined he allegedly tried to cover up a $4 million heist at his farm two years ago in an effort to abscond with the loot.