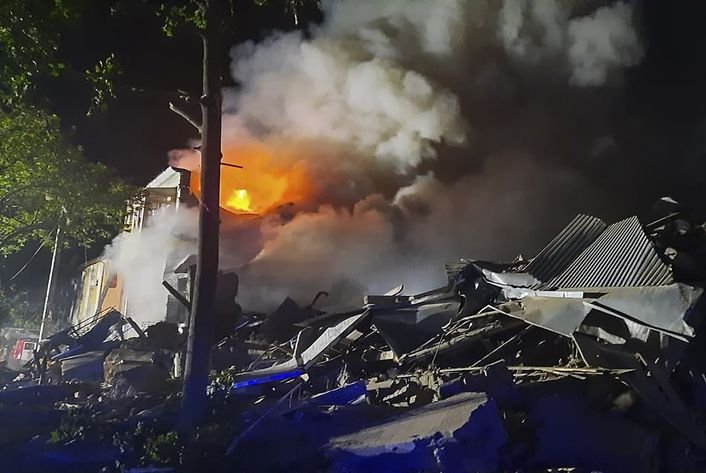 Rescuers work on putting out a fire at a residential hall after a rocket hit the Saltivka residential area in Kharkiv, Ukraine, on August 17. Photo by Ukraine State Emergency Service/UPI

The projectile hit a five-story building in Voskresenske in the Mykolaiv region, where four children and five adults were seriously injured. One girl lost an eye because of shrapnel, said Vitaliy Kim, head of the Mykolaiv Regional Military Administration.

Russian-occupied Crimea, forcibly annexed by Moscow in 2014, has become an increasing target of attacks. On Saturday, Sevastopol Gov. Mikhail Razvozhayev said a drone flew onto the roof of the Russia Black Sea Fleet headquarters before being shot down. Razvozhayev said no one was hurt. Ukraine had not accepted responsibility for the attack.

The British Defense Ministry said there were few territorial control changes over the past week with Russia showing small advances in the Donbas. Moscow has failed to break through Ukrainian defense lines along the outskirts of Bakhmut over the past week.

"Russia has not made any major efforts to advance in the Zaporizhzhia or Kharkiv sectors," the ministry said on Twitter. "In the southwest, neither Ukrainian nor Russian forces have made advances on the Kherson front line. However, increasingly frequent explosions behind Russian lines are probably stressing Russian logistics and air basing in the south."

The ministry said the situation is not likely to change over the next week as Russia appears to be preparing for limited local assaults with a smaller company of troops.

RELATED U.S. will send another $775 million in weapons to Ukraine

"However, over the coming months the initiative will go to whichever side manages to generate a credible, committed force for offensive operations," the ministry said.

War in Ukraine: Scenes from Kharkiv

A woman eats food given to her by volunteers at a food delivery station run by a Hare Krishna group in Kharkiv, Ukraine, on May 20, 2022. Photo by Ken Cedeno/UPI | License Photo

Ukraine advertises 'bravery' as a weapon of war

World News // 9 hours ago
French rail strike causes widespread weekend train cancelations
Dec. 3 (UPI) -- France's state state-owned railway company says it has canceled more than half of its scheduled trips this weekend due to a nationwide strike by rail conductors.

World News // 10 hours ago
Ukrainian police foil attempt to steal Banksy mural
Dec. 3 (UPI) -- Eight people who attempted to steal a mural by graffiti artist Banksy off the wall of a war-torn building in the Ukrainian city of Hostomel have been arrested, officials said Saturday.

World News // 11 hours ago
South African president Ramaphosa to run again despite corruption report
Dec. 3 (UPI) -- After previously signaling he would resign, South African President Cyril Ramaphosa confirmed on Saturday that he will not leave office and instead run for a second presidential term.