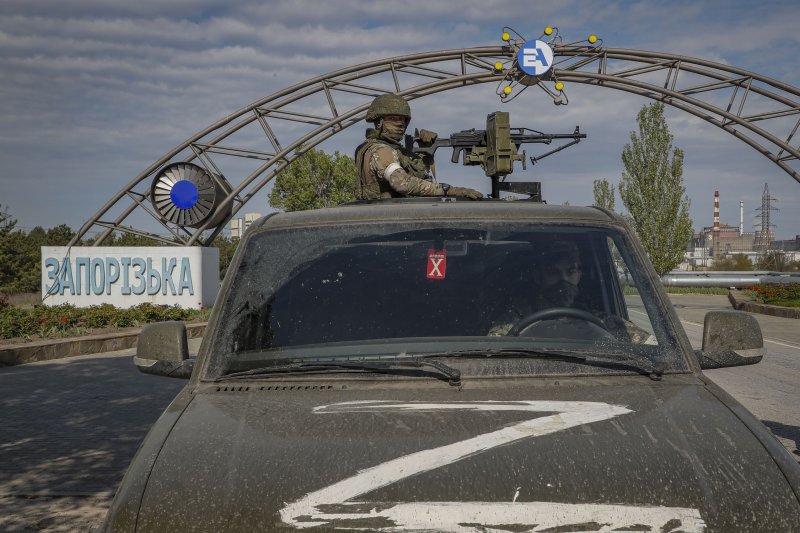 A picture taken during a visit to Mariupol organized by the Russian military shows Russian servicemen on guard at the Zaporizhzhia Nuclear Power Station in Enerhodar, southeastern Ukraine. File Photo by Sergei Ilnitsky/EPA-EFE

Aug. 6 (UPI) -- Russia is amassing troops in the south of Ukraine, renewing concerns Saturday that the invading forces could be preparing for a new campaign in the war.

Officials with Britain's Ministry of Defense say it's unclear if the long convoys of military personnel headed to the south of Ukraine are building a new attack or simply preparing for a counterattack.

According to the agency, the war could be entering a "new phase," The Guardian reported.

"Russia's war on Ukraine is about to enter a new phase, with the heaviest fighting shifting to a roughly 350km [217-mile] frontline stretching southwest from near Zaporizhzhia to Kherson, paralleling the Dnieper River," the agency said in a statement.

"Three strikes were recorded on the site of the plant, near one of the power blocks where the nuclear reactor is located," the state-run operator Energoatom said in a statement.

Other European leaders condemned Russia after it took control of parts of Donetsk, which includes a large nuclear power plant.

"This is a serious and irresponsible breach of nuclear safety rules and another example of Russia's disregard for international norms," he tweeted Saturday.

Borrell also demanded access to the region for an independent review by the International Atomic Energy Agency.

Also destroyed were a kindergarten building with a children's art center, the Kyiv Independent reported.

In other major cities, some residents said they are being pushed into forced conscription to join the fight against their own country, the newspaper said.

"I fled because it became unrealistic and dangerous to live in Donetsk," former resident Stepan, who asked for his last name to be held, told the Kyiv Independent.

He said he paid a smuggler a hefty fee to be able to flee the city, where "thousands" others were unable to leave.

"You can't go outside because of forced conscription," he added. "There is no water, no work."

Meanwhile, a military official accused pro-Russian forces of using humanitarian aid to lure people into a referendum on whether they want to join the invaders, The Guardian reported.

"Under the guise of providing food or construction materials, the occupying power and the collaborating public movement organize meetings with the population of the recently captured territories of the region," wrote Sergei Gaidai, chief of the Luhansk military administration, in a Telegram post.

Gaidai added the Russian operatives "lure out personal data, urge people to go to the so-called referendum" while "forcing people to exchange their will for food or drinking water".

World News // 55 minutes ago
Polls close in Kenyan election amid tight two-person race
Aug. 9 (UPI) -- The polls have closed in Kenya's Tuesday election, as the country moves toward choosing a replacement to President Uhuru Kenyatta.

World News // 6 hours ago
British weather office issues 'Amber' warning for more extreme heat
Aug. 9 (UPI) -- Britain's Met Office on Tuesday issued an Amber extreme heat warning for many regions of the country later this week, when temperatures are forecast to get near triple digits.

World News // 7 hours ago
Revolutionary Japanese fashion designer Issey Miyake dies at 84 after cancer battle
Aug. 9 (UPI) -- Issey Miyake, a tour de force of Japanese style and fashion for more than five decades, has died after a battle with liver cancer. He was 84.

World News // 8 hours ago
Russia shells areas in eastern Ukraine amid rising concern for nuclear power plant
Aug. 9 (UPI) -- Russian shelling on Tuesday targeted Ukrainian positions in the eastern and southern regions -- part of Moscow's military offensive to seize areas in the Donbas -- but Ukrainian officials said they made no major gains.

World News // 9 hours ago
Google back online after software issue causes short outage worldwide
Aug. 9 (UPI) -- Google was back online early Tuesday after the search engine reported a brief but widespread outage around the world overnight.

World News // 22 hours ago
Iran nuclear deal within reach as EU team submits 'final text' in Vienna talks
Aug. 8 (UPI) -- Iran may soon return to the 2015 nuclear deal that aims to limit its nuclear abilities after European Union negotiators said Monday that a "final text" has been drafted.