Two-time Olympic gold medalist and WNBA player Brittney Griner (C) is escorted to hear the court's verdict in Khimki City Court outside Moscow on Thursday. She was convicted and sentenced to nine years in prison. Photo by Maxim Shipenkov/EPA-EFE

Aug. 4 (UPI) -- A Russian court found WNBA star Brittney Griner guilty on Thursday on drug smuggling and possession charges and sentenced her to nine years in jail, in a case stemming from cannabis oil that was found in her luggage earlier this year.

The verdict came after closing arguments in Griner's trial at a court near Moscow. She has been in a Russian jail for almost six months since her arrest at Moscow's airport in February with two vape cartridges containing cannabis oil in her bags.

Griner, 31, who'd faced a total of 10 years in prison, pleaded guilty to the charges last month in a bid for leniency from the court. In Russia, criminal trials play out in court even if a defendant pleads guilty.

Cannabis is illegal in Russia, but Griner's attorneys have argued that she has a valid medical prescription and that she didn't intentionally pack the cartridges.

In its verdict Thursday, the court rejected those arguments and sentenced her to nine years in a Russian penal colony and a fine of 9 million rubles, equal to about $150,000.

Prosecutors argued for a 9 1/2-year jail sentence for Griner. The nine-year sentence is considered by many an excessive punishment for Griner possessing less than 2 grams of the cannabis oil.

The two-time U.S. Olympic gold medalist last week testified in her own defense and said she'd packed the vape cartridges by accident and that she had no "intention" of breaking Russian law.

In its verdict, the court ruled that Griner had deliberately intended to smuggle cannabis.

"I made an honest mistake and I hope that in your ruling that it doesn't end my life here," Griner said in a statement to the court Thursday, according to NPR.

Griner's attorneys said they were disappointed in the verdict and U.S. President Joe Biden said he's doing everything possible to secure her release. 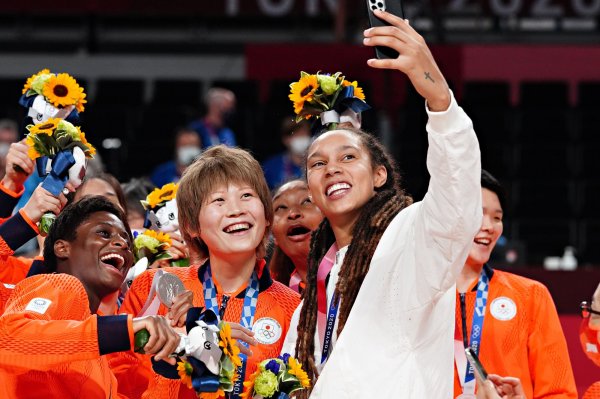 Brittney Griner takes a selfie with members of the Japanese women's basketball team following the awards ceremony at the Summer Olympic Games in Tokyo on August 8, 2021. File Photo by Richard Ellis/UPI
Advertisement

"Brittney Griner received a prison sentence that is one more reminder of what the world already knew: Russia is wrongfully detaining Brittney," Biden said in a statement.

"It's unacceptable, and I call on Russia to release her immediately so she can be with her wife, loved ones, friends, and teammates.

"My administration will continue to work tirelessly and pursue every possible avenue to bring Brittney and [imprisoned former U.S. Marine] Paul Whelan home safely as soon as possible."

Griner's attorneys said the verdict was "absolutely unreasonable" and promised to exercise the basketball star's right to an appeal. They emphasized that the Russian court "completely ignored all the evidence of the defense, and most importantly, the guilty plea," according to The New York Times.

Early this week, an expert chemist took the stand for the defense and testified that Russia hadn't complied with its own laws during an examination of the banned substance Griner had. Griner's defense team also argued that there were defects in how Russia measured the substance.

Griner's conviction in the case was considered all but certain because nearly 100% of defendants in Russia are convicted during trial. Her verdict immediately increased calls for Biden to secure her release.

Last week, U.S. Secretary of State Anthony Blinken said that "a substantial offer" had been put on the table," for Griner's release -- and that he'd also pressed Russian Foreign Minister Sergey Lavrov to release Whelan, who's been in a Russian prison since 2018 on an espionage conviction.

Whelan's name has come up as part of a potential prisoner swap that would free him and Griner in exchange for the United States freeing convicted Russian arms dealer Viktor Bout. Russian officials confirmed this week that those talks are ongoing but that "a concrete result" was not yet in place.

Experts on Russian law say the full legal process must play out with Griner admitting guilt and being convicted and sentenced before Russian officials would begin to consider a prisoner swap.

Some of Griner's supporters say she is being held as political leverage for Russia for its war in Ukraine. While the U.S. State Department has officially declared Griner as "wrongfully detained," family members have pushed the Biden administration to take stronger measures to free her.

Whelan's family, meanwhile, said they were hopeful but cautiously optimistic that the imprisoned Marine could be set free as part of Griner's case.

World News // 1 hour ago
Afghanistan faces hunger, economic collapse, other crises one year after Taliban's return
Aug. 15 (UPI) -- The Taliban on Monday celebrated the one-year anniversary of their return to power in Afghanistan after U.S. forces ended a 20-year campaign, but experts say the country is now dealing with multiple crises.

World News // 3 hours ago
Airliner comes dangerously close to plane spotters while landing on Greek island
Pilot Demetrios Gregoriou captured the stunning footage as a Wizz Air plane made its final descent into Skiathos Airport over a crowd of plane spotters.