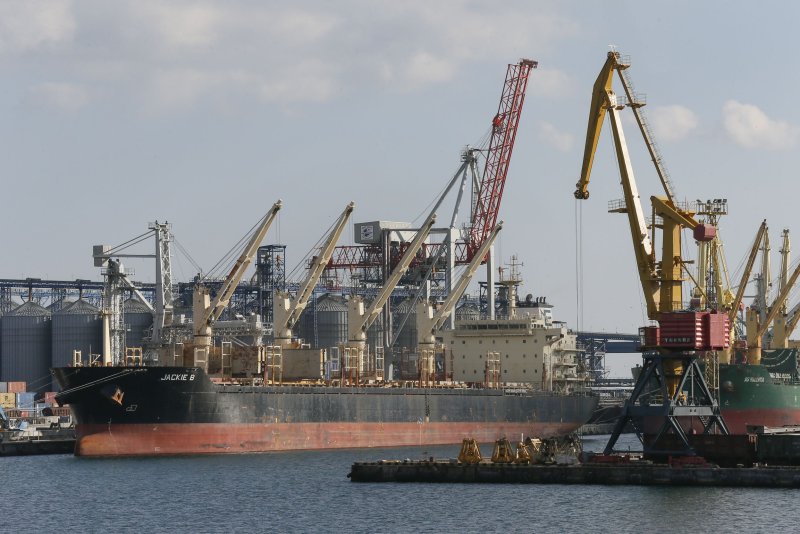 Local officials said Russian missiles struck the port city of Odessa, pictured in 2016, less than a day after an agreement to allow Ukraine to ship out grain. File Photo by Sergey Dolzhenko/EPA-EFE

Russian Kalibr-type cruise missiles damaged infrastructure at the Odessa Commercial Seaport, while two other missiles were shot down by Ukrainian air defenses, a spokesman for Odessa regional Gov. Serhiy Bratchuk said in a Telegram post.

Local lawmaker Oleksiy Honcharenko said the port caught on fire after the attack. The Ukrainian military reported there were no casualties and no grain silos were damaged.

The attack came less than 24 hours after the governments of Russia and Ukraine signed agreements in Istanbul, Turkey, allowing large Ukrainian shipments of grain that have been stuck at Black Sea ports to be delivered amid fears that global food security could be threatened.

More than 20 tons of Ukrainian grain has been at the Black Sea ports waiting to be shipped since Russia initiated its war in late February. The suspension of exporting the valuable Ukrainian crop has disrupted world markets and threatened to worsen worldwide hunger.

The attack on the Odessa seaport brought a quick condemnation from U.S. Ambassador to Ukraine Bridget Brink.

"Outrageous," she wrote in a Twitter post. "Russia strikes the port city of Odessa less than 24 hours after signing an agreement to allow shipments of agricultural exports. The Kremlin continues to weaponize food. Russia must be held to account."

"It took less than 24 hours for Russia to launch a missile attack on Odessa's port, breaking its promises and undermining its commitments before the U.N. and Turkey under the Istanbul agreement," Ukrainian Foreign Ministry spokesman Oleg Nikolenko wrote on Twitter. "In case of non-fulfillment, Russia will bear full responsibility for global food crisis."

A spokesman for United Nations Secretary-General António Guterres also reacted with dismay to the Odessa strike.

"Secretary-General António Guterres unequivocally condemns reported strikes today in the Ukrainian port of Odessa," the statement said. "Yesterday, all parties made clear commitments on the global stage to ensure the safe movement of Ukrainian grain and related products to global markets. These products are desperately needed to address the global food crisis and ease the suffering of millions of people in need around the globe. Full implementation by the Russian Federation, Ukraine and Turkey is imperative."

Meanwhile, Russia launched other attacks Saturday throughout Ukraine, including in the Kirovohrad oblast in the central part of the country. Thirteen missiles hit the region, targeting the Kanatove airfield and Ukrainian Railways facilities.

"So far, we have accurate information about three killed and 16 injured," said Andriy Raykovych, head of the regional military administration.

He said the attack caused problems with electricity and water supply in Kropyvnytskyi city.

In the northeast, Russian troops opened fire in the city of Kharkiv, injuring at least one civilian, Mayor Ihor Terekhov said.

"Several powerful strikes on the central part. One person has been reported injured so far. Hopefully, casualty numbers will not rise," he posted on Telegram.

War in Ukraine: Scenes from Kharkiv

A woman eats food given to her by volunteers at a food delivery station run by a Hare Krishna group in Kharkiv, Ukraine, on May 20, 2022. Photo by Ken Cedeno/UPI | License Photo

World News // 7 hours ago
1 in 5 experience workplace violence worldwide
Dec. 5 (UPI) -- A first-ever global survey of workplace harassment and violence found at least one in five people experience some form of violence at work.

World News // 19 hours ago
No shortage of bullish factors for crude oil
Dec. 5 (UPI) -- From a price cap to limits on Russian oil, crude oil prices will remain under the influence of a variety of global factors this week.