"I am stunned, outraged, and deeply saddened by the news," U.S. President Joe Biden said of the shooting Friday. 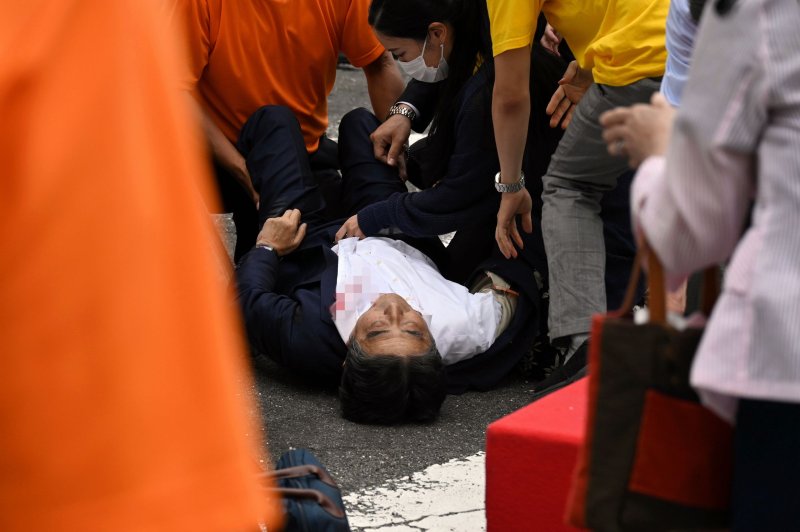 Former Japanese Prime Minister Shinzo Abe lies on the ground Friday after he was shot twice during a campaign speech at the Yamato-Saidaiji Station in Nara, Japan. He died later at a hospital. Photo by Asahi Shimbun/EPA-EFE

July 8 (UPI) -- Shinzo Abe, Japan's longest-serving prime minister who retired from the office almost two years ago after a bout with health problems, was shot dead Friday at a train station while making a campaign speech for a parliamentary candidate.

Abe was shot from behind just minutes after beginning the speech at the Kintetsu Railway in Nara in western Japan, located about 235 miles southwest of Tokyo.

The former prime minister was rushed to a hospital, but died hours later. His death was confirmed by Hidetada Fukushima, the professor in charge of emergency medicine at Nara Medical University Hospital.

Abe arrived at the hospital with no vital signs and was pronounced dead just after 5 p.m. after doctors administered more than 100 units of blood in transfusions but were unable to resuscitate him, Fukushima said.

Abe was making a campaign speech for a Liberal Democratic Party candidate ahead of Sunday's elections for the upper house of parliament when he was shot, Japanese Chief Cabinet Secretary Hirokazu Matsuno told reporters.

Police told NHK that they arrested a suspect, 41-year-old Yamagami Tetsuya, and confiscated a weapon at the scene that appeared in images to be a homemade gun. 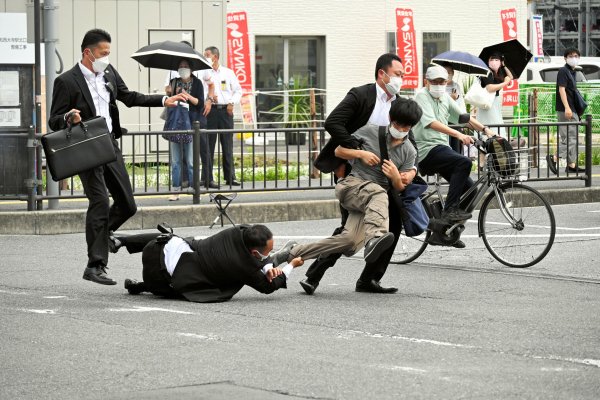 Security personnel tackle the man suspected of shooting former Prime Minister Shinzo Abe on Friday during a campaign speech at a train station in Nara, Japan. Photo by Asahi Shmbun/EPA-EFE

The Japanese Fire and Disaster Management Agency said Abe was shot twice, once in his neck and once in his chest.

Video of the incident circulating on social media shows Abe crumple to the ground as smoke billows behind him and two gunshots are heard. NHK reported that he was rushed to the hospital in a state of cardiopulmonary arrest.

Abe, 67, was the longest-serving prime minister in Japan's history and served two stints in the office. He remained one of the country's most influential -- and controversial -- politicians.

He held office from 2006 to 2007 and again from 2012 until September 2020, when he resigned due to health issues. The conservative leader was perhaps best known for his package of growth-oriented economic reforms, called "Abenomics," as well as his quest to revise Japan's pacifist constitution to allow for a more active military.

"Outrageous acts of this kind are absolutely intolerable, no matter the reason, and I strongly condemn this act," Matsuno said of Friday's shooting.

Prime Minister Fumio Kishida returned to Tokyo from campaigning in Yamagata due to the shooting and previously told reporters that Abe's condition was critical.

"I understand that all-out emergency measures are being taken," he said. "First and foremost, I offer my heartfelt prayers that former Prime Minister Abe is somehow spared."

Kishida said he was unsure of the motive behind the "despicable act," but suggested it may have been political due to its timing.

All politicians out campaigning ahead of this weekend's election have been instructed to return to Tokyo, he said.

U.S. President Joe Biden responded to the shooting by saying that he was saddened and "outraged."

"This is a tragedy for Japan and for all who knew him," Biden said in a statement. "He was a champion of the alliance between our nations and the friendship between our people.

"He cared deeply about the Japanese people and dedicated his life to their service. Even at the moment he was attacked, he was engaged in the work of democracy. While there are many details that we do not yet know, we know that violent attacks are never acceptable and that gun violence always leaves a deep scar on the communities that are affected by it."

Even in retirement, Abe was a power broker. He had been busy on the campaign trail in recent days stumping for candidates from his Liberal Democratic Party, which has maintained a near-monopoly on political power in Japan.

Shootings in Japan are extremely rare, as the country has some of the most restrictive gun laws in the world. According to the Japanese government, possession of firearms and swords are prohibited.

According to statistics from Japan's National Police Agency, there were 10 shooting incidents last year and most involved gang activity. In those incidents, one person died and four were injured.

Political attacks and assassinations are also exceedingly rare in Japan. In 1960, Japan Socialist Party leader Inejiro Asanuma was stabbed to death by a right-wing ultranationalist youth. In 1990, Nagasaki Mayor Hitoshi Motoshima survived being shot in an assassination attempt.

Rahm Emanuel, the U.S. ambassador to Japan, expressed shock and sadness over the shooting.

"Abe-san has been an outstanding leader of Japan and unwavering ally of the U.S.," Emanuel tweeted. "The U.S. Government and American people are praying for the well-being of Abe-san, his family & people of Japan."

NATO Secretary-General Jens Stoltenberg said he was "deeply saddened by the heinous killing of Shinzo Abe, a defender of democracy and my friend & colleague over many years."

Outgoing British Prime Minister Boris Johnson said Abe will be remembered by many for his global leadership "through uncharted times."

"My thoughts are with his family, friends and the Japanese people," he tweeted. "The U.K. stands with you at this dark and sad time."

Charles Michel, president of the European Council, said that Europeans are also in mourning.

"I will never understand the brutal killing of a great man," he tweeted.

Ex-Japanese Prime Minister Shinzo Abe slain at 67: a look back

Shinzo Abe, then-deputy secretary-general of the Liberal Democratic Party, speaks to the media after a four-day trip to India at the LDP head office in Tokyo on March 23, 2005. He emphasized the importance of better relations with India. Photo by Keizo Mori/UPI | License Photo

World News // 14 hours ago
COVID-19 world weekly cases drop 5% but some European nations surge
Oct. 2 (UPI) -- COVID-19 cases and fatalities continue to drop, including fatalities at the lowest since the start of the pandemic in March 2020, but cases are spiking in European nations, including Germany, Austria, Italy, France.

World News // 19 hours ago
At least 125 dead in soccer stadium stampede in Indonesia
Oct. 2 (UPI) -- At least 1125 people died in Indonesia when spectators at a soccer game were trampled in a panic after police fired tear gas in an effort to stop them from rushing onto the field, making it one of the sport's deadliest incidents.

World News // 1 day ago
Streets, border closed in Burkina Faso after second military coup in 8 months
Oct. 1 (UPI) -- Americans at the U.S. embassy in Burkina Faso were told to shelter in place overnight because of gunfire over a military coup on Friday, the state department said in a statement.
Advertisement

At least 125 dead in soccer stadium stampede in Indonesia