Six injured in first day of Pamplona running of the bulls 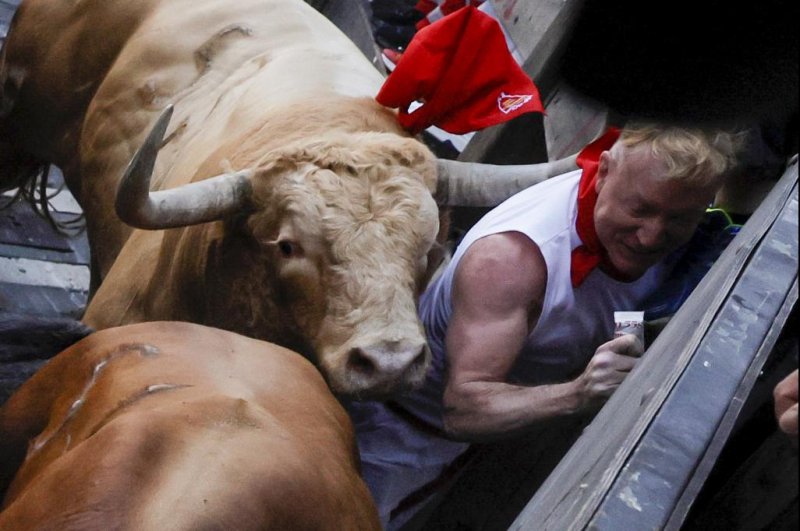 A man is hit by a charging bull during the traditional Running of the Bulls during the San Fermin Festival in Pamplona, Navarra, Spain Thursday, the first time the event is being held in two years after a hiatus because of the COVID-19 pandemic. Photo by Villar Lopez/EPA-EFE

July 7 (UPI) -- Six people including one American were injured during the annual running of the bulls at the San Fermin festival in the Spanish city of Pamplona Thursday.

The American suffered a broken arm, while the five remaining victims, all from Spain, were taken to the hospital with various injuries.

The American is from Atlanta, CNN reported.

This marks the first time the historic nine-day event has taken place in almost three years because of COVID-19 restrictions.

None of the six people were gored by the massive group of six animals, running down the 875-meter course through the ancient city's narrow streets.

Ordinarily, the run takes between 2 to 3 minutes to complete.

The Running of the Bulls is a prehistoric tradition!

That's why @PETAUK is proposing Pamplona start a new tradition: Running of the dinosaurs!

A total of eight people were gored during the entire length of the festival in 2019, the last time it was held. During the final day, a bull broke free from the pack of six animals and gored two Australians and a Spanish man.

The event has long been a target for animal rights activists.

Despite facing criticism from people who believe it is torture to use the animals in the bull runs and that the bulls are killed at the end of the event, the runs are protected under Spain's constitution as part of its cultural heritage.

People for the Ethical Treatment of Animals took a stand against the event Thursday. A number of its members dressed in inflatable dinosaur costumes before marching through the streets demanding an end to the tradition.

"The Running of the Bulls is a prehistoric tradition! That's why @PETAUK is proposing Pamplona start a new tradition: Running of the dinosaurs! Animal cruelty needs to go extinct," the group wrote on Twitter.

World News // 16 hours ago
Tanzania's government installs broadband Wi-Fi on Mount Kilimanjaro
Aug. 18 (UPI) -- Tourists climbing Mount Kilimanjaro will be able to access the internet while scaling the volcanic mass after the government of Tanzania installed a broadband network at Uhuru Peak.

World News // 21 hours ago
Grades drop for British students taking first exams in three years
Aug. 18 (UPI) -- Students in the U.K. saw their grades drop this year, the first time in three years students have taken exams because of the COVID-19 pandemic.