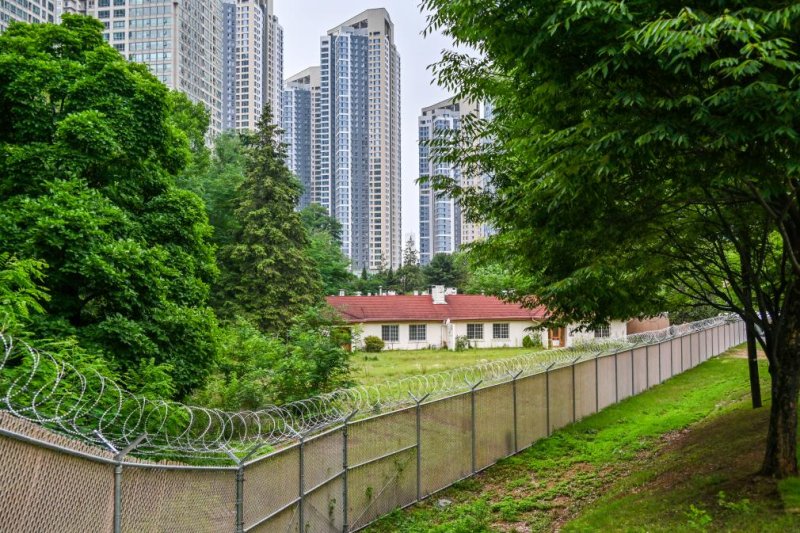 Yongsan Garrison, long the home of the U.S. military in South Korea, is going to be transformed into a park in the heart of Seoul that the government says will become a signature attraction in the dense megacity. Photo by Thomas Maresca/UPI

SEOUL, July 1 (UPI) -- For almost 120 years, Yongsan Garrison has been off-limits to South Korean civilians -- but now the walled compound in the heart of Seoul is turning into a public park that officials say will transform the city.

Beginning last month, residents were able to enter the former headquarters of the American military on a pilot tour -- and city leaders say the future Yongsan Park will become Seoul's "new face."

"Just like Central Park in New York City, Yongsan Park will provide the largest leisure space [in Seoul] for citizens," Oh Jang-hwan, director of the strategic planning division for the Seoul metropolitan government, told UPI -- adding that the project will provide a much-needed expanse of green to the densely packed metropolis of 10 million people.

For two weeks in June, guests were allowed to tour a small section of the base that includes sports fields and a former residential area for officers.

The officers' single-story ranch-style homes with tiled Spanish roofs and front yards made a striking contrast to the surrounding city, a leafy slice of suburban America in the shadows of Seoul's gleaming high-rises.

It was this glimpse of a different world that drew Oh Ji-eun, a 25 year-old nurse, to join a guided walking tour last week.

"I was curious to visit because it looks like the U.S.," she said. "I haven't ever seen anything like this before in Korea."

Historical photos and exhibits were set up on some of the lawns, while tour guide Im Jong-hwa pointed out quirks of the base, including its twin sets of utility poles -- some carrying 220-volt power lines and others feeding homes the American-standard 110 volts.

Im detailed the history of Yongsan, which was established in 1904 by Japan during its colonial occupation of Korea and has remained off-limits to the public since. The base ultimately became the headquarters of U.S. Forces Korea and the United Nations Command from the Korean War in the 1950s until 2018, when both commands relocated to Camp Humphreys in Pyeongtaek, 40 miles south of Seoul.

"Not many Korean people know the history of Yongsan, that the Japanese were here," Im said. "Especially the younger ones."

Other visitors, however, had long wanted a chance to see the compound's history firsthand.

Choi Ha-yeon, 74, said that he'd been near the base many times but had never been allowed to set foot inside -- until now.

"This is a very big part of [Korean] history," Choi said. "I wanted a chance to see it before it changes. I hope the government preserves some of the historical sites."

Detailed plans for Yongsan Park are still in the works, said Jang Seung-Gueon, deputy director of park policy for the Ministry of Land, Infrastructure and Transport, which is overseeing the project.

"Developers did the basic investigation with the help of the U.S. Army," Jang told UPI. "But there is still a discussion whether they're going to preserve, remodel or get rid of some of the historical pieces."

South Korean citizens have not been allowed access to the site for almost 120 years, since Japanese colonizers first established a military facility here in 1904. Photo by Thomas Maresca/UPI

The ministry set up suggestion mailboxes at several locations around the site, looking to get visitors' feedback about the park's development.

Plans for a handover from the U.S. military to South Korea date as far back as 2003, when it was first announced that American forces would move to the new base in Pyeongtaek. That transfer was expected to be completed in 2008, but delays and construction issues pushed final relocation back by a decade.

A master plan for the park's design by Netherlands-based firm West 8 was chosen in 2012, but only a small portion of the base's land has been turned over so far, and the Korean government and developers have not been able to conduct a full survey.

In early June, the United States handed over a parcel of land in its third transfer of the year. South Korea has so far received about 30% of the garrison's roughly 500 acres.

Jang said it will take seven years from the final handover for the park to be completed. He added that a timetable is in place with the U.S. military to complete the process, but it hasn't been released publicly.

Interest in the future of the base has picked up as recently inaugurated South Korean President Yoon Suk-yeol moved his presidential office to the former defense ministry headquarters, which is located right next to the Yongsan site.

During the pilot opening, guests were able to visit a field near the president's office and pose for photos with a ceremonial vehicle and a defense helicopter.

The project, though, is not without controversy. A small group of protesters was stationed near the entrance to the base as visitors entered, warning of the high levels of contaminants, such as benzene, that were discovered in groundwater there after decades of oil leaks.

Seoul has been cleaning the area around the base since the early 2000s, and Jang said there are presently no safety concerns.

The protesters, however, accuse Seoul of giving the United States a "free pass" on the issue.

"Our opinion is that the U.S. government should be in charge because this is U.S. Army pollution," activist Kim Eun-hee said.

Most visitors on the pilot tour, however, had high hopes for the future of Yongsan Park -- seeing it as a once-in-a-lifetime opportunity to transform a symbol of military occupation and war into a signature green space for Seoul.

"When they open this up, I hope it will be an iconic park for Seoul."

World News // 14 hours ago
Streets, border closed in Burkina Faso after second military coup in 8 months
Oct. 1 (UPI) -- Americans at the U.S. embassy in Burkina Faso were told to shelter in place overnight because of gunfire over a military coup on Friday, the state department said in a statement.

World News // 15 hours ago
Natural gas pipeline between Bulgaria and Greece officially launches
Oct. 1 (UPI) -- The European Union on Saturday officially announced the launch of a new Interconnector between Greece and Bulgaria, which will help diversify the gas supply to the Balkan region of Europe.

World News // 19 hours ago
Russia withdraws troops from encircled city in eastern Ukraine
Oct. 1 (UPI) -- The Kremlin announced Saturday it had withdrawn troops from the key eastern Ukrainian transport hub of Lyman after Kyiv said its troops had encircled the city in a counter-offensive.

World News // 1 day ago
Thailand prime minister to stay in office until 2025
Sept. 30 (UPI) -- Thailand Prime Minister Prayuth Chan-ocha will be allowed to stay in office through 2025 after the country's Constitutional Court ruled on Friday that his eight-year term in officer started in 2017 and not when he took p
Advertisement