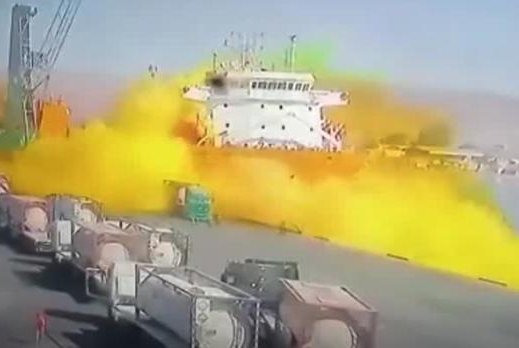 A chlorine gas leak killed at least 13 people and injured hundreds of others at Jordan's port of Aqaba. Photo courtesy of AlMamlaka TV

June 28 (UPI) -- A toxic gas leak at Jordan's port of Aqaba has killed at least 13 people and injured 260 others, according to Jordan's emergency relief coordinating agency.

Video from a CCTV camera, released by state-owned AlMamlaka TV, showed a crane lifting a chlorine tank onto a ship Monday before the container slipped and dropped onto the pavement.

People can be seen running for their lives as the container explodes and releases a bright yellow gas onto the ship and port.

"At 4:15pm [local time] on Monday afternoon, a chlorine gas leak occurred in the port of Aqaba due to the fall and explosion of a tank containing this substance," said a statement from the National Center for Security and Crisis Management.

Jordan's Civil Defense quarantined the area and advised residents in Aqaba city to stay inside and keep windows and doors closed. A team of hazardous materials specialists was dispatched to the scene.

The toxic leak is "under control" and no longer poses a risk, Jordan's media minister Faisal Shboul said Tuesday.

According to authorities, the chemical storage container fell because of a crane malfunction.

The deputy director of Aqaba's port told AlMamlaka TV that an "iron rope" carrying the container "broke" while it was being loaded onto the ship. The container, which was scheduled to be exported to Djibouti, was carrying between 25 and 30 tons of chlorine.

Chlorine is used in industrial and household cleaning products such as bleach to kill harmful bacteria.

The yellow gas can be deadly if it is inhaled causing fluid build-up in the lungs or pulmonary edema. If swallowed or allowed to come into contact with skin, it reacts with water to produce acids that damage cells in the body.

Around 123 people remained in the hospital Tuesday with some in critical condition.

World News // 1 hour ago
Former Australia PM Morrison faces calls to resign over secret self-appointments
Aug. 16 (UPI) -- Former Australian Prime Minister Scott Morrison is facing calls for him to resign from parliament after revelations that while in power he secretly appointed himself to five ministries.

World News // 1 hour ago
Russia-Ukraine war: Explosions, fire at Crimea depot leads thousands to evacuate
Aug. 16 (UPI) -- Explosions rocked a military depot and fires broke out in the area of Russia-annexed Crimea on Tuesday, prompting thousands of people to evacuate amid more fighting on the contested peninsula.

World News // 3 hours ago
Bill Gates urges South Korea to be a leader in 'crisis moment for global health'
SEOUL, Aug. 16 (UPI) -- Microsoft co-founder Bill Gates called on South Korea on Tuesday to step up in the international fight against infectious diseases, saying the country is poised to play a lead role in "a crisis moment for global health."

World News // 1 day ago
Afghanistan faces hunger, economic collapse, other crises one year after Taliban's return
Aug. 15 (UPI) -- The Taliban on Monday celebrated the one-year anniversary of their return to power in Afghanistan after U.S. forces ended a 20-year campaign, but experts say the country is now dealing with multiple crises.

World News // 18 hours ago
U.S. reports no casualties in 'ineffective' drone strike near U.S. base in Syria
Aug. 15 (UPI) -- U.S.-backed coalition leaders condemned an unsuccessful drone attack near the Tanf base in southeast Syria, which houses U.S. troops and their Syrian allies. U.S. forces reported no deaths, no injuries and no damage.