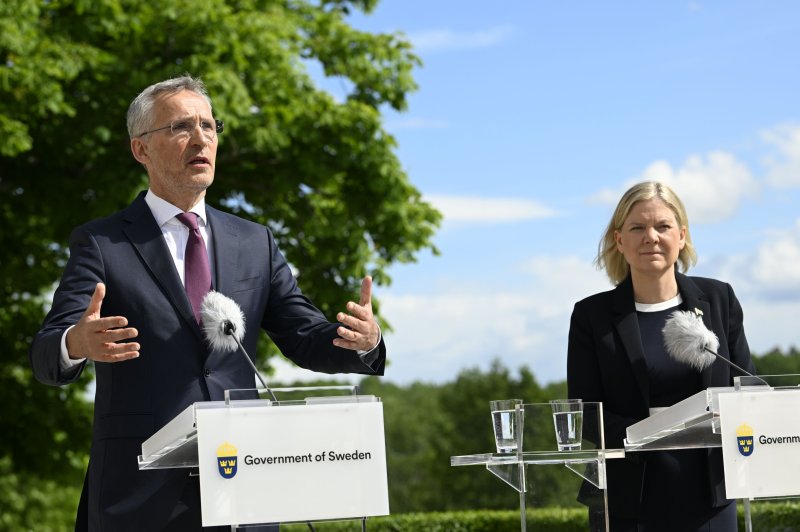 June 13 (UPI) -- The leaders of NATO and the Swedish government said Monday they are committed to addressing Turkey's objections to Sweden and Finland joining the alliance over terrorism concerns.

They could not, however, offer a timetable under which NATO would be able act on their applications in the wake of Russia's invasion of Ukraine.

"It is impossible to say, exactly," Stoltenberg said when asked when NATO might take a vote on allowing the Nordic nations to join the military alliance, declining to provide details on ongoing negotiations with Ankara over the impasse.

Both Finland and Sweden formally applied to join NATO on May 18, departing from long-held traditions of official neutrality when it came to Russia. But all 30 NATO nations, including Turkey, must agree to allow new members, and Turkish President Recep Tayyip Erdogan quickly blocked the moves.

He accuses Sweden and Finland of supporting the YPG, a Kurdish militia in Syria which was instrumental in the defeat of the Islamic State, and the PKK, which has long battled the Turkish state to establish an autonomous region for Kurds inside Turkey.

Turkey deems those groups to be terrorists, claiming the PKK is responsible for the deaths of 40,000 people, including women, children and infants.

"We take Turkey's concerns very seriously, and all their issues, not the least their security concerns when it comes to the fight against terrorism," Andersson said. "We have a bilateral and trilateral dialogue ongoing with Turkey right now and we will state clearly how we are working against terrorism."

The prime minister said Sweden has strengthened its anti-terrorism laws in recent years and now has a "much stronger legislation" to address the issue, including even more updates to come next month.

Stoltenberg added that NATO is working "hard and actively" to get Sweden and Finland into the alliance "as soon as possible."

Despite conceding the timeline remains murky, he said the Nordic countries' security has already been enhanced due to their NATO aspirations. Sweden, he noted, has received security assurances from many NATO members as the alliance has stepped up its presence and exercises in the Nordic region.

"This is about terrorism and about weapons exports," he said. "And we have to understand and remember that no other NATO ally has suffered more terrorist attacks than Turkey."

World News // 37 minutes ago
U.S. Moscow Embassy security alert warns Americans to leave Russia
Sept. 28 (UPI) -- All Americans in Russia should leave immediately, according to a security alert from the U.S. Embassy in Moscow. The warning came as the Russian government rounds up men to force them to fight in Ukraine.

World News // 2 hours ago
Economic fallout from Hurricane Fiona to reach $2B to $4B in Canada
Cleanup is underway in Atlantic Canada after Fiona made landfall early Saturday as one of the most intense weather systems to ever impact the country.

World News // 3 hours ago
European leaders call damage to Nord Stream 1 and 2 pipelines sabotage
Sept. 28 (UPI) -- The European Union on Wednesday said breaches in the Nord Stream 1 and 2 natural gas pipelines happened because of a "deliberate act" but stopped short of blaming Russia for the leaks.

Doubts surface over hydrogen as an energy and heating source