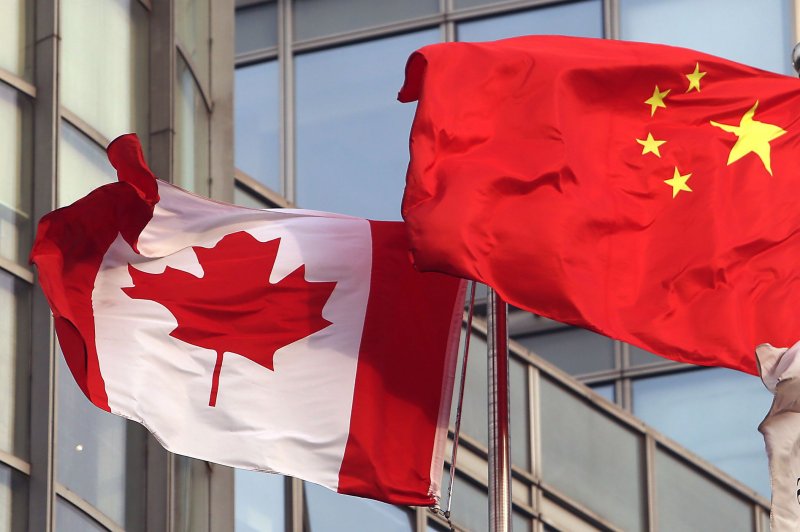 June 6 (UPI) -- China on Monday slammed Canada's "risky and provocative" aircraft patrols near North Korea and warned of "serious consequences" in the aftermath of complaints from Ottawa about Beijing's aggressive behavior in the skies.

"Canadian military planes have stepped up reconnaissance and provocations against China under the pretext of implementing U.N. Security Council resolutions, endangering China's national security and endangering the safety of frontline personnel on both sides," Wu Qian, spokesman for China's defense ministry, said in a statement.

Wu's remarks came after Canada last week accused the Chinese Air Force of harassing its pilots as they conducted patrols in international airspace near North Korea to monitor for U.N. sanctions violations.

Ottawa said that Chinese jets repeatedly buzzed Canadian aircraft, coming so close that the aircrews could see each other and forcing Royal Canadian Air Force pilots to change course to avoid a collision.

"These interactions are unprofessional and/or put the safety of our RCAF personnel at risk," the Canadian Armed Forces said in a statement, adding that Ottawa had lodged a diplomatic complaint.

Wu, however, said that Canada's operation was "unfriendly and unprofessional" and that China "quickly took powerful, safe and professional measures to deal with it."

"China urges Canada to face up to the seriousness of the situation, strictly restrain the front-line troops, and refrain from any risky and provocative behavior," Wu said. "Otherwise, all serious consequences that arise will be borne by the Canadian side."

Canada is not the only country to accuse China of endangering its patrol aircraft in recent days.

Beijing has also ratcheted up its military provocations against Taipei over the past several months, with frequent warplane incursions into the self-governing island's Air Defense Identification Zone and combat drills it described as a "solemn warning to the recent U.S.-Taiwan collusion activities."

China's "growing coercion" is amplifying tensions in the region to dangerous levels, U.S. Secretary of State Antony Blinken said in a recent speech.

World News // 12 hours ago
London offers all children polio boosters after more virus found in city sewers
Aug. 10 (UPI) -- Health officials in London are offering polio vaccine boosters to all children between the ages of one and nine after more polio virus was found in the city's sewers.

World News // 14 hours ago
Speaker Nancy Pelosi: 'We will not allow China to isolate Taiwan'
Aug. 10 (UPI) -- U.S. House Speaker Nancy Pelosi, D-Calif., said during a Capitol press conference Wednesday that she went to Taiwan during her Asian-Pacific trip to "salute a thriving democracy."

World News // 17 hours ago
French rescuers euthanize Begula whale stuck in river
Aug. 10 (UPI) -- An 1,800-pound Begula whale that got stuck in France's Seine River for more than a week earlier this month has died while being moved back out to sea, officials said Tuesday.

World News // 18 hours ago
French wildfire reignites, forcing thousands to evacuate as 16 homes were destroyed
Aug. 10 (UPI) -- A massive wildfire that reignited in southwest France has forced the evacuation of more than 6,000 people. The fire in the Gironde region burned another 14,826 acres Wednesday.

World News // 19 hours ago
Several dead after new Russian attacks in Ukraine; Zelensky vows to retake Crimea
Aug. 10 (UPI) -- Russia launched new mortar attacks on sites in eastern and southern Ukraine on Wednesday, as Ukrainian President Volodymyr Zelensky vowed to recapture a part of the country seized by Moscow almost a decade ago.