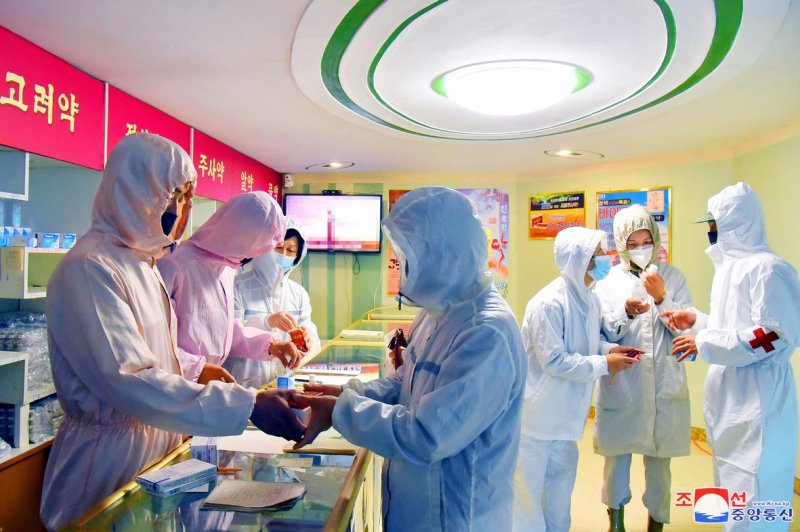 A World Health Organization official said that the agency assumes North Korea's COVID-19 situation is "getting worse," despite the regime's claim that it is subsiding. Photo by KCNA/EPA-EFE

SEOUL, June 2 (UPI) -- A top World Health Organization official said that the U.N. agency believes North Korea's COVID-19 outbreak, which the secretive regime claims is improving, is "getting worse, not better" and appealed to Pyongyang for more information.

"We have real issues in getting access to the raw data and to the actual situation on the ground," WHO health emergencies director Dr. Mike Ryan said during an online press briefing Wednesday.

"We assume that situation is getting worse, not better, but it is very, very difficult to provide a proper analysis to the world when we don't have access to the necessary data," he said.

North Korea reported its first official COVID-19 infection last month after more than two years of claiming to be virus-free amid a total border shutdown.

Daily case numbers have been on a steady decline since a peak of nearly 400,000 on May 15. State-run Korean Central News Agency claimed last week that emergency anti-epidemic measures were "succeeding in effectively curbing and controlling the spread of the pandemic disease and maintaining the clearly stable situation."

Pyongyang has not reported any new deaths since last Friday, when officials placed the total count at just 69 -- a fatality rate far lower than anywhere else in the world and one that experts doubt, as North Korea's population remains almost entirely unvaccinated.

Ryan said the WHO has offered vaccines on three separate occasions and continues to offer assistance and medical supplies.

"We do not wish to see intense transmission of this disease in a mainly susceptible population in a health system that is already weakened," Ryan said.

World News // 10 hours ago
Vast plumes of methane bubbling up from Nord Stream leaks
Sept. 30 (UPI) -- Scientists confirm that the ruptured Nord Stream natural gas pipeline network is spewing vast quantities of methane from the floor of the Baltic Sea.

World News // 10 hours ago
Thailand prime minister to stay in office until 2025
Sept. 30 (UPI) -- Thailand Prime Minister Prayuth Chan-ocha will be allowed to stay in office through 2025 after the country's Constitutional Court ruled on Friday that his eight-year term in officer started in 2017 and not when he took p

World News // 13 hours ago
Putin signs annexation order for 4 Ukrainian regions
Sept. 30 (UPI) -- Ukrainian officials said on Friday that "dozens" of civilians were killed by a Russian strike while in a convoy of cars heading to pick up relatives in the city of Zaporizhzhia.

World News // 1 day ago
U.S. diplomat elected to lead U.N. IT agency over Russian official
Sept. 29 (UPI) -- American Doreen Bogdan-Martin beat out a Russian official on Thursday, to become the next secretary-general of the International Telecommunication Union.