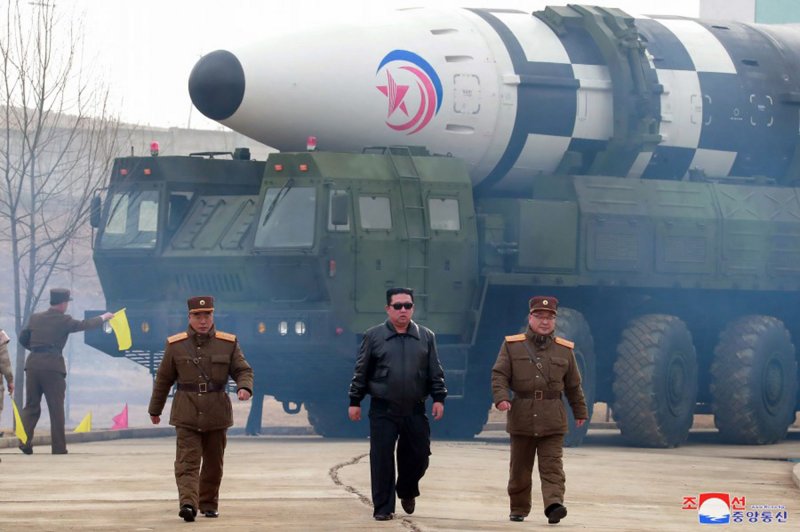 U.S. and South Korean officials have warned in recent weeks that North Korea is also getting ready to conduct a nuclear weapon test. Biden will arrive in Seoul on Friday for a three-day visit.

"Preparations for launching missiles, including intercontinental ballistic missiles, are understood to be imminent," Kim told reporters at a briefing.

However, Kim said that the probability of a nuclear detonation this weekend is "evaluated as relatively low."

The security adviser said that a "Plan B" was in place in the event of a North Korean provocation during Biden's visit.

"The leaders of South Korea and the United States will immediately enter the command and control system of the South Korea-U.S. combined defense posture," Kim added.

The White House announced last week that Biden might visit the Demilitarized Zone, but Kim said that the trip is not on the schedule and that the U.S. president would participate in a different security-related event.

Biden has twice visited the DMZ, which separates North and South Korea, most recently in 2013 when he was U.S. vice president and in 2001 when he was chairman of the Senate foreign relations committee.

This week's trip will be Biden's first to Asia as president. He is scheduled to hold a summit on Saturday with South Korean President Yoon Suk-yeol, who was inaugurated last week.

Yoon has vowed to take a harder line against North Korea and is looking for the United States to strengthen its extended deterrence against Pyongyang's nuclear threats. The two sides are also expected to discuss the possible deployment of additional U.S. strategic assets, such as nuclear-powered submarines, aircraft carriers and long-range bombers, on the Korean Peninsula.

North Korea has conducted several weapons tests this year, including an ICBM launch in March. The secretive state is also scrambling to contain an outbreak of fever cases connected to its first reported COVID-19 infections.

Another 233,000 people came down with the unspecified fever, state-run Korean Central News Agency reported Wednesday, pushing the total to more than 1.7 million cases and 62 deaths since late April.

U.S. officials said the outbreak is not likely to deter Pyongyang's plans for another nuclear test.

"We have never seen [North Korean] regime prioritize the humanitarian concerns of their own people over these destabilizing programs that pose a threat to peace and security in the Indo-Pacific and beyond, so I do not think there is any expectation of that," State Department spokesman Ned Price said at a briefing Tuesday.

After leaving South Korea, Biden will visit Japan and meet with Prime Minister Fumio Kishida and take part in a summit of the leaders of Quadrilateral Security Dialogue, or Quad, before returning to Washington on Tuesday.

World News // 7 hours ago
NATO summit: Biden says U.S. will support Ukraine against Russia 'for as long as it takes'
June 30 (UPI) -- Concluding the NATO summit in Spain, President Biden told reporters that the security meetings were "historic" and significant progress was made for the future of the World War II-era defensive alliance.

World News // 6 hours ago
Israeli Knesset dissolves, sets 5th national elections in 4 years
June 30 (UPI) -- Israel's parliament on Thursday voted to dissolve and set new elections for November, which will be country's the fifth in less than four years, after an unsuccessful period with an experimental coalition government.

World News // 14 hours ago
New Zealand designates Proud Boys, The Base as terrorist groups
June 29 (UPI) -- New Zealand has quietly designated the Proud Boys and The Base, two right-wing extremist groups in the United States, as terrorist organizations.

World News // 1 day ago
15,000 people remain in Lysychansk; death toll in Ukrainian mall attack rises
June 29 (UPI) -- Amid a key NATO summit in Spain on Wednesday, Ukrainian forces dug into Lysychansk in an effort to buy time to be resupplied with weapons from the defensive alliance in the latest round of fighting.