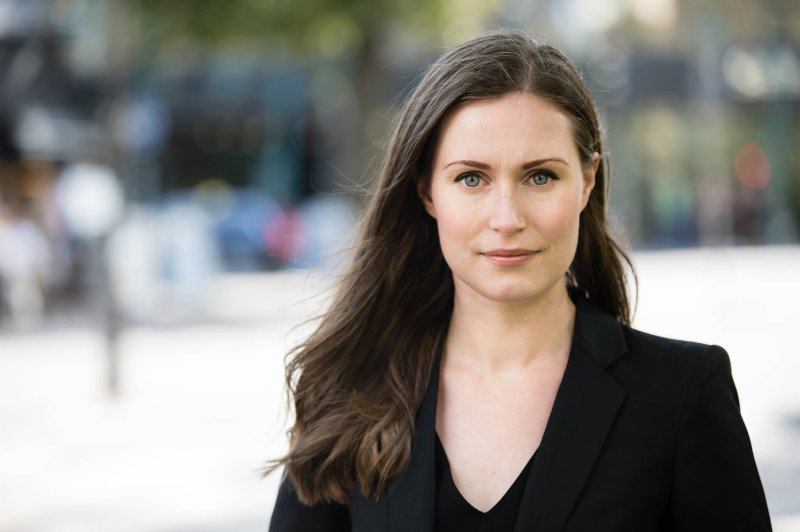 Sanna Martin, Prime Minister of Finland. Wednesday Martin said a decision on whether Finland will apply for NATO membership is likely within weeks. Photo courtesy of Finnish Government

April 13 (UPI) -- Finnish Prime Minister Sanna Marin said Wednesday a decision on whether Finland will apply to join NATO could happen within weeks.

"I won't give any kind of timetable when we will make our decisions, but I think it will happen quite fast. Within weeks, not within months," Marin said Wednesday during a joint Stockholm newsconference with her Swedish counterpart.

The Finnish government adopted a report on the changes in the security environment Wednesday and submitted it to Parliament for consideration, according to a Finnish Foreign Ministry news release.

That report does not include a recommendation one way or the other about applying for NATO membership but warns of risks due to Russia's negative view of NATO and calls for close cooperation between Finland and Sweden.

Finland and Sweden both already have NATO partnership agreements they entered in 1994 that beefed up military links with NATO but offer no security guarantees.

In the Wednesday news release, the Finnish Foreign Ministry said, "Finland retains the option of joining a military alliance and applying for NATO membership."

"The war of aggression started by Russia is a blatant violation of international law and jeopardizes the security and stability of the whole of Europe both over the short and long term," the statement said. "Russia's aggression is also a violation of the Charter of the United Nations and the principles of the Organization for Security and Cooperation in Europe (OSCE)."

Speaking at Wednesday's joint news conference with Finland, Swedish Prime Minister Magdalena Andersson said, "This is a very important time in history. The security landscape has completely changed. We have to analyze the situation to see what is best for Sweden's security, for the Swedish people, in this new situation."

Andersson said during the news conference that there was no point in delaying analysis of whether it was right for Sweden to apply for NATO membership.

No NATO decision by Sweden is expected until after a security policy review is completed before the end of May.

After declaring its independence from Russia in 1917, Finland twice defended itself from Russian invasions during WWII.

World News // 3 hours ago
Muslims around world to celebrate Eid al-Adha
July 7 (UPI) -- Muslims around the world this week will celebrate the holy celebration of Eid al-Adha, which also marks the end of the annual Hajj pilgrimage.

World News // 4 hours ago
Russia strikes grain hangars in southern Ukraine, troops on Snake Island
July 7 (UPI) -- Russian forces on Thursday intensified attacks on one of Ukraine's most valuable crops -- grain -- in their bid to expand their grip over the battle-scarred country after 19 weeks of fighting.

World News // 5 hours ago
British PM Boris Johnson to resign amid scandal, wave of resignations
July 7 (UPI) -- After months of scandal and calls for his resignation, British Prime Minister Boris Johnson agreed to step down Thursday after a wave of departures involving his closest allies and Cabinet members.