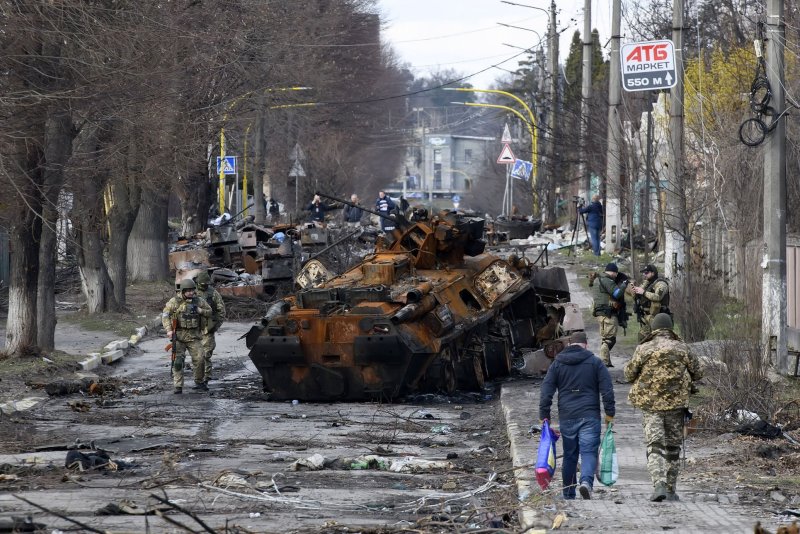 April 6 (UPI) -- British Foreign Secretary Liz Truss said the "age of engagement with Russia is over" during a meeting with fellow NATO foreign ministers in Belgium on Wednesday.

Truss said in a statement obtained by CNN that the NATO-Russia Founding Act, which rules that "NATO and Russia do not consider one another adversaries," is "dead and it is time to cast off an outdated approach to handling Russia."

"The age of engagement with Russia is over," she said. "We need a new approach to security in Europe based on resilience, defense and deterrence."

She also called on NATO to increase sanctions against Russia and arm Ukraine "quickly and decisively" while saying she is working with her Group of Seven counterparts to further sanction Russian banks.

RELATED Oil execs to testify in Congress amid concerns about gas price gouging in U.S.

"For NATO to remain at the vanguard of global security, it must be bold. As President [Dwight] Eisenhower, the alliance's first supreme commander, said: 'History does not long entrust the care of freedom to the weak or the timid,'" Truss added.

Ukrainian President Volodymyr Zelensky has pleaded with Western allies for more help, including weapons and equipment, and repeated those requests during an address to the United Nations Security Council on Tuesday.

"Moscow is not giving up its ambitions in Ukraine," NATO Secretary General Jens Stoltenberg said in a statement ahead of the ministers meeting. "We now see a significant movement of troops away from Kyiv, to regroup, rearm and resupply, and they shift their focus to the east.

"Targeting and murdering civilians is a war crime. All the facts must be established and all those responsible for these atrocities must be brought to justice."

The 30 NATO foreign ministers were joined at Wednesday's meeting by representatives from non-NATO nations Ukraine, Finland, Sweden, Georgia, Australia, Japan, New Zealand, South Korea and the European Union as they discussed supplying Ukraine with anti-tank weapons, air defense systems and other equipment to defend itself as well as more humanitarian aid.

The United States announced a ban Wednesday on new investments in Russia and additional sanctions against Russian businesses and officials, including President Vladimir Putin's adult daughters. The European Union is also mulling expanding a list of sanctions to include a rejection of Russian coal, which was proposed Tuesday.

Meanwhile, Ukrainian officials said that Russia has agreed to open four new humanitarian corridors to allow civilians to escape to safety in southeast Ukraine. The new corridors bring the total to 11 across Ukraine.

The new corridors will allow Ukrainians to go from the contested southern port city of Mariupol, Melitopol and Enerhodar to Zaporizhzhia. Buses will also run from Berdyansk and Tokmak to Zaporizhzhia.

The United Nations said that at least 1,563 people have been killed and 2,213 have been injured since the invasion began on Feb. 24.

In the northwest Kyiv suburb of Borodyanka, as many as 200 people are feared dead after repeated Russian airstrikes, according to the town's mayor.

World News // 2 hours ago
Trial starts in Russia for WNBA star Brittney Griner
July 1 (UPI) -- The Moscow cannabis oil possession trial of WNBA player Brittney Griner began Friday, with Griner facing a possibility of up to 10 years in a Russian prison if convicted.

World News // 3 hours ago
Inflation jumps to record 8.6% in eurozone
July 1 (UPI) -- Inflation in the eurozone reached an annual rate of 8.6% in June, an increase from 8.1% in May, according to the latest European economic statistics released Friday.

World News // 4 hours ago
Former U.S. military base in South Korea to become green park in heart of Seoul
SEOUL, July 1 (UPI) -- For almost 120 years, Yongsan Garrison has been off-limits to South Korean civilians -- but now the walled compound in the heart of Seoul is turning into a public park that officials say will transform the city.

World News // 14 hours ago
Xi Jinping returns to Hong Kong for first trip outside of mainland China in two years
June 30 (UPI) -- Chinese President Xi Jinping traveled to Hong Kong on Thursday to mark the 25th anniversary of its return from British rule and to inaugurate the administration of its new chief executive, John Lee.