A destroyed Russian tank is seen Friday next to damaged houses in a village near Kharkiv, Ukraine. The area was recently recaptured by the Ukrainian army from Russian forces. Photo by Roman Pilipey/EPA-EFE

April 1 (UPI) -- The International Committee of the Red Cross said it was unable to reach civilians in Mariupol, Ukraine, on Friday after encountering unsafe conditions.

A team of nine personnel and three vehicles set off for Mariupol but had to turn back to the city of Zaporizhzhia. The ICRC was attempting to facilitate the safe evacuation of civilians.

"For the operation to succeed, it is critical that the parties respect the agreements and provide the necessary conditions and security guaranties," the ICRC said in a statement.

The evacuation attempt from the war-battered port city of Mariupol came after the Russian military renewed assurance that a humanitarian corridor will be open from the town to Zaporizhzhia. The ICRC said it would try to reach Mariupol again Saturday.

"If and when the safe passage operation does happen, the ICRC's role as a neutral intermediary would be to accompany the convoy out from Mariupol to another city in Ukraine," the ICRC said. "Our presence will put a humanitarian marker on this planned movement of people, giving the convoy additional protection and reminding all sides of the civilian, humanitarian nature of the operation."

Russian armed forces were accused of delaying dozens of buses sent by Ukrainian officials to the city to help in the evacuation on Thursday. Russia's Defense Ministry said it would reopen the route at the request of French President Emmanuel Macron and German Chancellor Olaf Scholz.

"For the successful implementation of this humanitarian operation, it is proposed to conduct it with the direct participation of representatives of the office of the U.N. High Commissioner for Refugees and the International Committee of the Red Cross," the Russian military said, according to CNN.

The Red Cross said on Friday that it's received clearance from Ukraine and Russia on an evacuation plan, which includes 54 buses.

Vitaliy Kim, the mayor of Mykolaiv, said 28 people died in a Russian airstrike on its regional administration building this week. Kim also said emergency crews spent days looking through the rubble of the nine-story building for possible survivors. 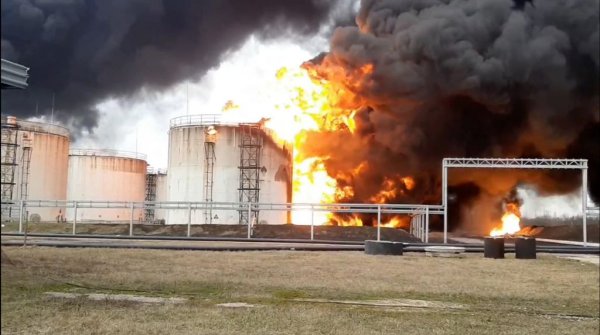 A major fire is seen Friday at an oil depot in the city of Belgorod, Russia -- the result, according to Moscow, of a Ukrainian helicopter attack. Officials in Kyiv have not yet verified the Russian claim. Photo courtesy Emercom of Russia Press Service via EPA-EFE
Advertisement

Russia continues to be blamed for breaking a promise early this week to remove some of its troops and "reduce military activity" in Ukraine -- as Ukrainian officials insist that Moscow has just repositioned them to other areas.

"Russia maintains pressure on Kyiv and other cities, so we can expect additional offensive actions, bringing even more suffering," NATO Secretary-General Jens Stoltenberg said according to The New York Times.

Ukrainian negotiator David Arakhamia said peace talks between Kyiv and Moscow started up again on Friday although it wasn't clear if they were talking virtually or in person in Turkey.

Meanwhile, Russia accused Ukraine Friday of flying two attack helicopters across the border into Belgorod and blowing up a fuel dump with rockets.

Russian military officials said the explosion and fire were the result of a Ukrainian chopper attack, but Ukrainian military spokesman Oleksandr Motuzyanyk said he didn't have sufficient information to confirm or deny that Kyiv was behind the strike.

If verified, it would be the first offensive by Ukraine on Russian soil since the start of the war on Feb. 24.

Ukrainian forces have also been running a defensive operation in the capital Kyiv and other major Ukrainian cities, officials said Friday, in an effort to keep them from falling under Russian control. Consequently, Ukraine has regained some areas originally taken by Russian forces, including Ukraine's second-largest city, Kharkiv.

World News // 1 hour ago
London offers all children polio boosters after more virus found in city sewers
Aug. 10 (UPI) -- Health officials in London are offering polio vaccine boosters to all children between the ages of one and nine after more polio virus was found in the city's sewers.

World News // 2 hours ago
Speaker Nancy Pelosi: 'We will not allow China to isolate Taiwan'
Aug. 10 (UPI) -- U.S. House Speaker Nancy Pelosi, D-Calif., said during a Capitol press conference Wednesday that she went to Taiwan during her Asian-Pacific trip to "salute a thriving democracy."

World News // 5 hours ago
French rescuers euthanize Begula whale stuck in river
Aug. 10 (UPI) -- An 1,800-pound Begula whale that got stuck in France's Seine River for more than a week earlier this month has died while being moved back out to sea, officials said Tuesday.

World News // 7 hours ago
French wildfire reignites, forcing thousands to evacuate as 16 homes were destroyed
Aug. 10 (UPI) -- A massive wildfire that reignited in southwest France has forced the evacuation of more than 6,000 people. The fire in the Gironde region burned another 14,826 acres Wednesday.

World News // 7 hours ago
Several dead after new Russian attacks in Ukraine; Zelensky vows to retake Crimea
Aug. 10 (UPI) -- Russia launched new mortar attacks on sites in eastern and southern Ukraine on Wednesday, as Ukrainian President Volodymyr Zelensky vowed to recapture a part of the country seized by Moscow almost a decade ago.