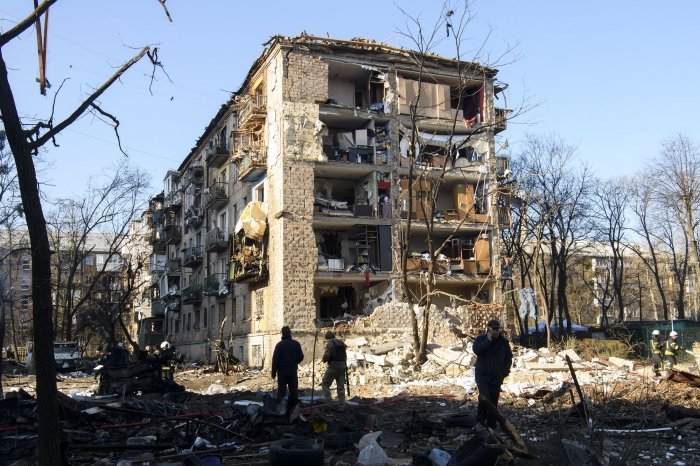 March 22 (UPI) -- Ukrainian forces have retaken control of a key suburb of Kyiv and expelled Russian troops, officials said Tuesday, preventing them from encircling the capital that Moscow has been trying to capture for nearly a month.

The Ukrainian army took control of the suburb, Makariv, which is west of downtown Kyiv, according to Ukraine's defense minister.

The victory came after a tense battle with Russian forces, the Armed Forces of Ukraine said in a Facebook post.

Meanwhile, Ukraine's military said about 3,000 people have been evacuated from Mariupol, a key port city in the south of Ukraine that Moscow has been targeting for weeks. Shelling continued overnight and into Tuesday, officials said.

RELATED Biden says Russia has used hypersonic missile in Ukraine, Putin's 'back against the wall'

Ukrainian Deputy Prime Minister Iryna Vereshchuk said of the 400,000 people who lived in Mariupol before the Russian invasion, about 100,000 remain. She said food and water there are low because much of the city has been destroyed.

Ukrainian President Volodymyr Zelensky said late Monday that Russia attacked a humanitarian corridor in the Zaporizhzhia region that was intended to give safety to fleeing civilians. Several children were injured in the attack, he said.

In comments made before a business roundtable event at the White House, Biden said that Russian disinformation about the pretext -- Ukraine possessing chemical weapons -- is a ruse to give Moscow a reason to use chemical weapons of their own.

"[Putin's] back is against the wall and he's talking about new false flags he's setting up, including he's asserting that we, in America, have biological as well as chemical weapons in Europe. [That's] simply not true. I guarantee you," Biden said at the event.

"They're also suggesting that Ukraine has biological and chemical weapons in Ukraine. That's a clear sign he is considering using both of those," Biden said.

"He's already used chemical weapons in the past, and we should be careful of what about -- of what's about to come. He knows there'll be severe consequences because of the united NATO front, but the point is: It's real."

The National Union of Journalists of Ukraine said Monday that four reporters were taken from their homes in Melitopol by Russian forces, but were released a few hours later.

World News // 40 minutes ago
Mother of Iranian teen who died in protests blames Iranian authorities
Oct. 7 (UPI) -- The mother of an Iranian teenage girl who died during the nationwide protests charges that she was murdered by authorities, according to media reports.

World News // 54 minutes ago
British PM Liz Truss opens North Sea to drillers
Oct. 7 (UPI) -- British Prime Minister Liz Truss announces an auction for the rights to drill for oil and gas in the territorial waters of the North Sea.

World News // 3 hours ago
Russia makes gains in Donetsk; Ukraine expands Kherson successes
Oct. 7 (UPI) -- Leaders of a rogue Ukrainian territory said Friday they have pushed out Ukrainian troops in three locations while Kyiv said it has made new gains in the southern Kherson region in the latest fighting.