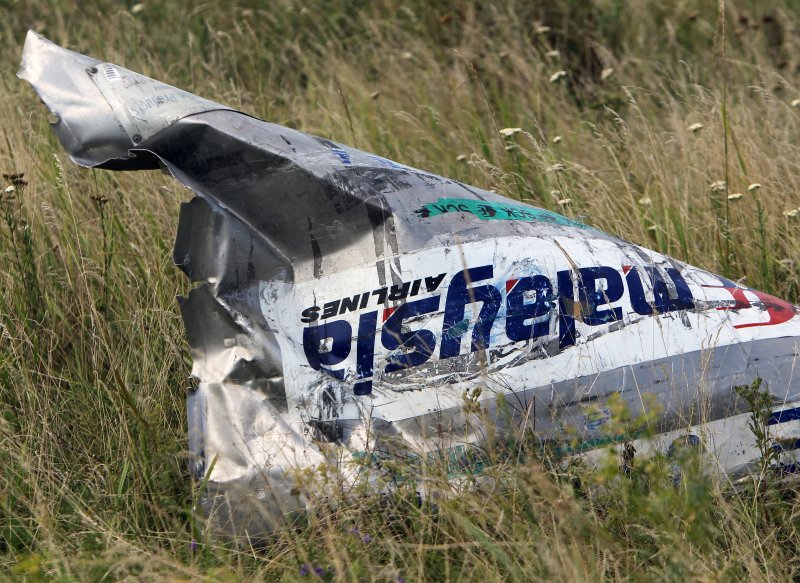 Part of the wreckage was found on July 20, 2014, at the main crash site of the Boeing 777 Malaysia Airlines flight MH17, which crashed over the eastern Ukraine region on July 17, 2014. Australia and Netherlands have filed legal action against Russia on Monday over the crash. File Photo by Igor Kovalenko/EPA-EFE

March 14 (UPI) -- Australia and the Netherlands announced Monday that they have started legal proceedings against Russia through the International Civil Aviation Organization in connection with the shooting down of Malaysia Airlines MH17 over Ukraine in 2014.

Russia had forcibly taken over the Ukrainian peninsula of Crimea and fighting in separatist eastern regions supported by Moscow had intensified with the commercial airliner was shot down, killing 298. Among those were 38 Australians and 196 Dutch nationals.

"Following the suspension of talks, Australia and the Netherlands held consultations on what steps should be taken next. This resulted in the initiation, earlier today, of legal proceedings against Russia before the ICAO."

In a joint statement by Australian Prime Minister Scott Morrison, Foreign Minister Marise Payne and Michaelia Cash, attorney-general, said there is "overwhelming evidence" of Russia's involvement in the plane's downing and needs to be held accountable.

"Today's joint action by Australia and the Netherlands is a major step forward in both countries' fight for truth, justice and accountability for this horrific act of violence, which claimed the lives of 298 victims, 38 of whom called Australia home," the Australian statement said.

"The Russian Federation's refusal to take responsibility for its role in the downing of Flight MH17 is unacceptable and the Australian government has always said that it will not exclude any legal options in our pursuit of justice."

The governments charge that a Russian Buk-TELAR surface-to-air missile took down the airplane on July 17, 2014, and it could only have been operated by the Russian military or someone under the direct instruction of the military.

Evidence exists that a Buk missile system was removed from the separatists-controlled Ukraine region to Russia shortly after the plane was taken down.

"While we cannot take away the grief of those whose loved ones died as a result of Russia's actions, the Australian government will pursue every available avenue to ensure Russia is held to account so that this horrific act never happens again," the Australian statement said.

World News // 9 hours ago
Oil prices drop after OPEC stands pat on production
Feb. 1 (UPI) -- The lack of certainty about the direction of the global economy may have encouraged OPEC to err on the side of caution, analysts said.

World News // 10 hours ago
Eurozone inflation eases for third straight month, falls to 8.5%
Feb. 1 (UPI) -- The eurozone's annual inflation rate continued on its downward track last month, the third successive month that the pace at which prices are increasing has slowed, according to European Union figures out Wednesday.

World News // 13 hours ago
Missing radioactive capsule found by side of Western Australia highway
Feb. 1 (UPI) -- Australian authorities scouring hundreds of miles of highway for a radioactive capsule that fell off the back of a truck last week while in transit has been found, officials said.

World News // 21 hours ago
Arab countries 'headed in wrong direction,' new poll says
Jan. 31 (UPI) -- A majority of Arab citizens believe their countries are headed in the wrong direction, with most blaming the economy or diplomatic relations with Israel, according to the 2022 Arab Opinion Index.