Residents cross the destroyed bridge as they flee from the frontline town of Irpin in the Kyiv region of Ukraine on Wednesday. Photo by Mikhail Palinchak/EPA-EFE

Zelensky and other officials reported the attack on the hospital in Mariupol, which is one of five cities that Moscow agreed to allow refugees to flee with a new cease-fire agreement on Wednesday.

Before the hospital attack, Ukrainian officials said they were skeptical that Russia would comply with the cease-fire.

City councilors in Mariupol called the damage from the bombing "colossal."

"Mariupol. Direct strike of Russian troops at the maternity hospital. People, children are under the wreckage," Zelensky said in a tweet.

Mariupol. Direct strike of Russian troops at the maternity hospital. People, children are under the wreckage. Atrocity! How much longer will the world be an accomplice ignoring terror? Close the sky right now! Stop the killings! You have power but you seem to be losing humanity. pic.twitter.com/FoaNdbKH5k— Володимир Зеленський (@ZelenskyyUa) March 9, 2022

"How much longer will the world be an accomplice ignoring terror? Close the sky right now! Stop the killings! You have power but you seem to be losing humanity."

In a late Wednesday speech addressed to the people of Europe, Ukraine and Mariupol, Zelensky said 17 people were injured in the bombing but rescue workers were continuing to search through the debris.

"Today, we must be united in condemning this war crime of Russia, which reflects all the evil that the invaders brought to our land," he said. "Destroyed hospitals. Destroyed schools, churches, houses. And all the people killed. All the children killed.

"The air bomb on the maternity hospital is the final proof. Proof that the genocide of Ukrainians is taking place."

He demanded that democratic countries aware of the bombing increase sanctions against Russia to force it to the negotiating table as well as either institute a no-fly zone as Ukraine has been asking for or arm them with fighter jets "so that we can do everything ourselves."

The Ukrainian city of Zhytomyr was the target of another airstrike that hit a thermal power plant and a civilian building Wednesday, according to Facebook posts from the city's mayor.

There were no reported casualties linked to the strike, Sukhomlyn said. There was a woman living in the civilian building who was hiding in the basement at the time of the hit and who emerged with minor injuries, he continued.

A Ukrainian rescue team inspects damaged residential buildings that were shelled by Russian forces in the Zhytomyr region of Ukraine on Wednesday. Photo courtesy of Ukrainian State Emergency Service

No recorded deaths have been found at the thermal power plant either, though Sukhomlyn said it will likely need to be shut down. He said the plant provides heat for around 30% of the city, which last year had a population of around 260,000 people.

Patients and staff at the two hospitals, which includes a children's hospital, have also not reported any fatalities.

"Luckily everyone was in the bomb shelter, all alive," he wrote in the video caption in Ukranian.

The attack came one day after Russian military strikes destroyed a textile factory and an apartment building in Zhytomyr on Tuesday night. A Ukrainian tank factory located just outside the city was also targeted and leveled on Saturday.

Earlier Wednesday, Zelensky repeated his calls for the international community to impose a no-fly zone over Ukraine, saying that failure to do so will lead to a humanitarian catastrophe.

The new cease-fire was scheduled to run from 9 a.m. to 9 p.m. Wednesday and Russia said it would allow civilians to flee five cities -- Kyiv, Chernihiv, Sumy, Kharkiv and Mariupol. Ukrainian officials, however, noted that Russian forces have been shelling escape routes every day this week.

Zelensky said in his speech that 35,000 people were rescued through these corridors and that they were preparing six more routes for evacuations.

After failed attempts to secure safe corridors for Ukrainians trying the leave the country, Deputy Prime Minister Iryna Vereshchuk said earlier that she was hopeful that the 12-hour cease-fire on Wednesday would allow the departure of noncombatants from several areas.

Vereshchuk said she was consulting with the International Red Cross about the proposed routes and called on Russia to keep its commitment to the passage without hostilities.

"People have to be able to leave the places where they are now hiding from the hail of [rockets] and the devastating fire that is killing them," she said, according to CNN.

Ukrainian officials said evacuations would resume Wednesday in war-torn Sumy, where a Russian airstrike on Tuesday killed several people, but noted that there are hundreds of thousands of civilians trapped in Mariupol.

According to President Volodymyr Zelensky, there are still adults and kids under the rubble. The number of victims is yet unknown, local authorities report.

Meanwhile, the United States has agreed to send Patriot anti-missile batteries to Poland to protect allied troops in the country. There is some concern that Moscow could ultimately fire rockets toward Poland or other neighboring countries that oppose the Russian advances.

Poland has been a staging area for Western forces and equipment, and U.S. President Joe Biden sent a couple thousand U.S. troops there last month to aid NATO forces in protecting Ukraine.

On Wednesday, U.S. Vice President Kamala Harris traveled to Poland as part of a three-day trip through Eastern Europe to support allied forces. The White House said she will visit Poland and Romania.

"She will be carrying a three-part message. The first is that the U.S. stands firmly and resolutely with our NATO Allies," a senior administration official told reporters. "Second is our continuing support for the Ukrainian people, both in terms of humanitarian and military assistance to them.

"And third is the fact that Putin has made a mistake that will result in resounding strategic defeat for Russia. And you're already seeing evidence of that in terms of what's going on inside Ukraine as well as the impact of the sanctions that we have imposed on the Russian economy."

Harris' trip comes after U.S. officials rejected the Polish government's offer to send MiG-29 fighters to a U.S. air base in Germany for use by the Ukrainian military.

Protesters rally outside Russian Embassy in Washington over Ukraine 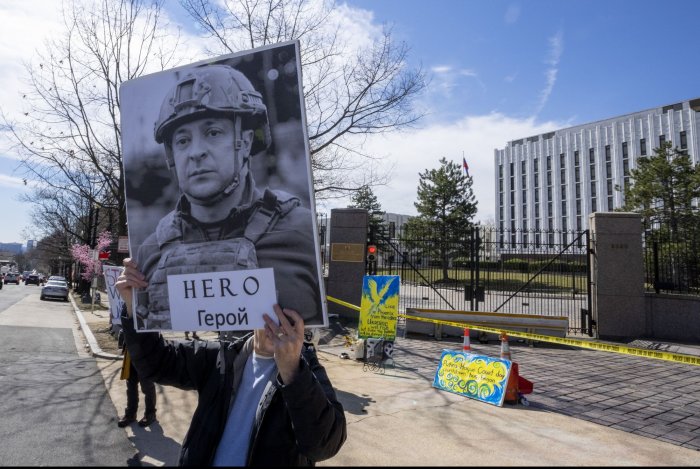 A protester holds up a photo of Ukrainian President Volodymyr Zelensky outside the Russian Embassy in Washington on Tuesday. Russia invaded Ukraine on February 24. Photo by Pat Benic/UPI | License Photo

World News // 15 hours ago
Quote from Beijing official on '5 years' of COVID-19 restrictions causes stir
June 27 (UPI) -- Residents of Beijing reacted with confusion and alarm Monday when a top Communist Party official was quoted in official media saying strict COVID-19 policies could be in place for five years.

World News // 20 hours ago
WNBA's Brittany Griner appears briefly in Russian court
June 27 (UPI) -- WNBA star Brittney Griner appeared briefly during a closed-door preliminary hearing with a new appearance set for July 1 but no other movement in her case since being initially detained on Feb. 17.

World News // 18 hours ago
Ancient Israeli mosaic returns home after years touring the world
June 27 (UPI) -- An ancient mosaic discovered in Israel more than 25 years ago, is now back in that country and went on display Monday after years spent touring prestigious museums around the world.

World News // 20 hours ago
Zelensky tells G7 leaders Ukraine needs help to end Russia war by year's end
June 27 (UPI) -- Ukrainian President Volodymyr Zelensky called on G7 leaders to make a major push to end Russia's invasion of Ukraine by the end of the year in a virtual address at the group's meeting on Monday.