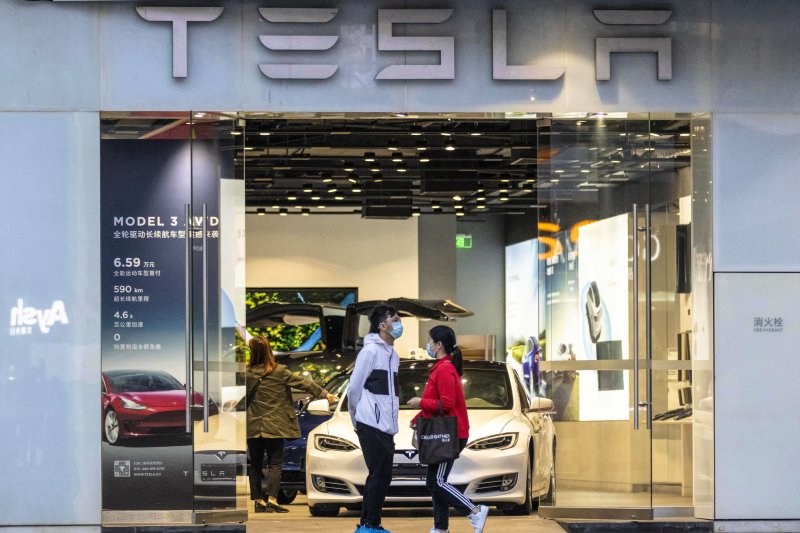 The Tesla store in Shenzhen, Guangdong province, China, is pictured in March 2020. Germany Friday approved a Tesla gigafactory in Berlin-Brandenberg to make EV's and batteries. Photo by Alex Plavevski/ EPA-EFE

It took a little more than two years to build the factory and get it ready to start production.

"The U.S. car company Tesla today received the final approval notice for the construction of its two factories for the production of electric cars and battery cells from the approval authority, the State Office for the Environment," said the Brandenberg State Environment Agency in a press statement.

Brandenberg Prime Minister DIetmar Woidke said in the press statement, "The settlement of Tesla is the first major project in Germany that combines climate neutrality with the creation of additional industrial jobs."

Woidke said getting the plant open and approved was a "mammoth task" that was performed with breakneck speed.

According to CNBC, the approval is a conditional license subject to a public objection period and other final inspection conditions.

"The Tesla approval process is an unusual process in several respects. In a comparatively short time, the State Office for the Environment inspected and approved not just a factory, but an entire industrial area with several large-scale plants and repeated public participation," Brandenberg Environment Minister Axel Vogel said in the press statement.

World News // 3 hours ago
India's COVID-19 cases highest in 4 months, but deaths stable
June 26 (UPI) -- COVID-19 cases in India are surging to the highest level in four months but the infections are a fraction at the peak of the pandemic in May 2021 when the Delta subvariant was dominant though deaths now remain low.

World News // 7 hours ago
Russia strikes Kyiv for first time in weeks, will supply Belarus with nuclear-capable missiles
June 26 (UPI) -- Russia on Sunday fired missiles on Kyiv, the capital of Ukraine, for the first time in weeks as fighting continues into its fifth month.

World News // 2 days ago
Toyota recalls all-electric bZ4X over wheels falling off
June 24 (UPI) -- Toyota has recalled more than 2,000 all-electric SUVs over problems that could cause the wheels or axles to fall off.
Advertisement