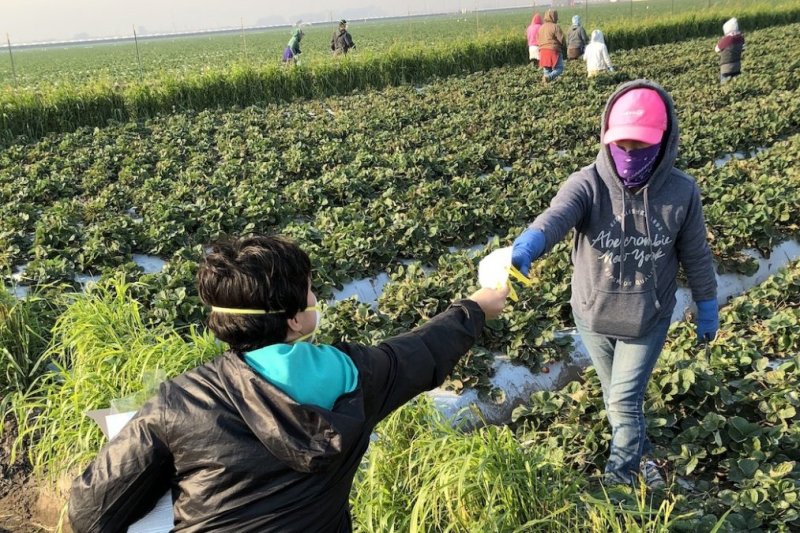 Global food prices have risen to their highest levels since 2011 amid disruptions to the supply chain, drought and other harmful weather, increasing energy prices and the COVID-19 pandemic. File Photo courtesy of Farmworker Association of Florida

A global index released by the United Nations Food and Agriculture Organization showed food prices have risen to their highest levels since 2011 in January.

Cereal prices rose 0.1% from December and 12.5% from January 2021, while dairy increased 2.4% for its fifth consecutive monthly increase to rise 18.7% from the same time last year. The price of meat also increased 17.3% from last January.

The price of oils rose 4.3% month-to-month reached their highest levels since the index began tracking food prices in 1990.

The price of sugar, however, fell 3% from December, declining for a second consecutive month to its lowest level in the past six months.

The FAO cited rising crude oil prices, drought conditions in Argentina and Brazil, avian flu outbreaks as well as processing and transportation delays and labor shortages brought on by the COVID-19 pandemic for the price increases.

Last week, the International Monetary Fund issued a report showing that food prices rose about 23% last year and are expected to climb 4.5% in 2022 before declining next year.

IMF data also showed that the energy sector was largely driving inflation in the United States while food was the second largest factor contributing to inflation in Europe.

Impacts of food inflation most burden residents of emerging and low-income countries including parts of Latin America and Africa where people may spend 50%-60% of their income on food, compared to the United States where food accounts for less than one-seventh of household shopping bills.

Between 720 million and 811 million people in the world went hungry in 2020, according to rapid phone surveys in 72 countries conducted by the World Bank, an estimated increase of about 118 million over 2019.

In the United States, the Department of Agriculture estimated about 10% of the population was food insecure in 2020, meaning households are forced to use strategies such as eating less varied diets and utilizing federal food assistance programs or community food pantries to avoid substantially disrupting their eating patterns.

Maurice Obstfeld, a senior fellow at the Peterson Institute for International Economics and a former chief economist at the IMF, told The New York Times that it wasn't "much of an exaggeration" to say the world is on the brink of a global food crisis.

Other factors such as global spending to combat the COVID-19 pandemic contribute to "a perfect storm of adverse circumstances" that may lead to conflict much how Egypt and Libya saw political uprisings in 2011, he added.

"There's a lot of worry about social unrest on a widespread scale," Obstfeld said.

Fueled by oil and gas prices, eurozone sees another record rise of inflation

World News // 5 hours ago
ISIS 'Beatle' sentenced to life in prison
Aug. 19 (UPI) -- A British man accused of operating an ISIS hostage-taking scheme that led to the deaths of four Americans, was sentenced Friday to eight life sentences.