Guterres condemned the test, saying it was "a breaking of the DPRK's announced moratorium in 2018 on launches of this nature, and a clear violation of Security Council resolutions," according to a statement by his spokesman released Tuesday.

The Democratic People's Republic of Korea is the official name of North Korea.

"It is of great concern that the DPRK has again disregarded any consideration for international flight or maritime safety," Guterres added.

He called on North Korea to "desist from taking any further counterproductive actions."

Pyongyang's firing of a Hwasong-12 missile on Sunday marked its biggest weapons test since 2017 and came at the conclusion of a record month of launches under leader Kim Jong Un. 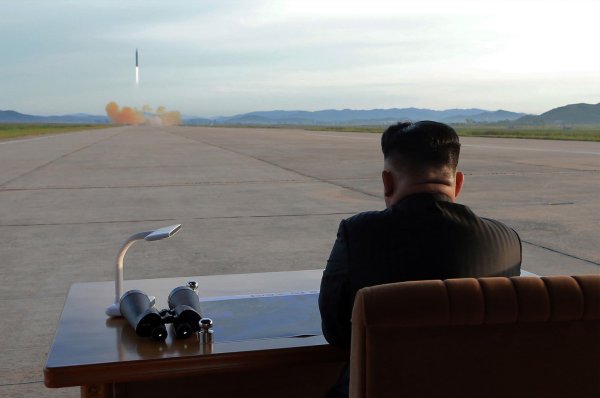 North Korean leader Kim Jong Un watches the launch of a Hwasong-12 at an unspecified location on November 28, 2017. File Photo by KCNA via EPA-EFE
Advertisement

Pyongyang declared a moratorium on intercontinental ballistic missile and nuclear weapons tests during a period of diplomatic detente in 2018, but Kim suggested earlier this month that he was ready to lift the ban in order to face "the hostile policy and military threat by the U.S."

Analysts estimate that the Hwasong-12 has a range of roughly 2,800 miles, putting the U.S. territory of Guam within reach. North Korea has claimed that the missile is capable of carrying a nuclear warhead.

Deputy Secretary of State Wendy Sherman also held a call with her South Korean and Japanese counterparts on Tuesday. She "denounced the DPRK's recent and escalatory ballistic missile launches as violations of U.N. Security Council resolutions and destabilizing to the region," according to a readout.

State Department spokesman Ned Price said Monday that Washington is looking for ways to address the North Korea challenge diplomatically while also continuing to move forward "with different steps to hold the DPRK responsible and accountable."

The Biden administration leveled sanctions on several individuals and entities tied to Pyongyang's illicit weapons program on Jan. 12 and later led a call for the U.N. Security Council to blacklist five North Koreans. That proposal was blocked by Russia and China, but the United States has requested another closed-door Security Council meeting on Thursday over the Hwasong-12 launch, according to multiple reports.

World News // 11 hours ago
Google pulls translation app from mainland China
Oct. 3 (UPI) -- Google has axed its Translate app in mainland China, abandoning one of its last footholds there.