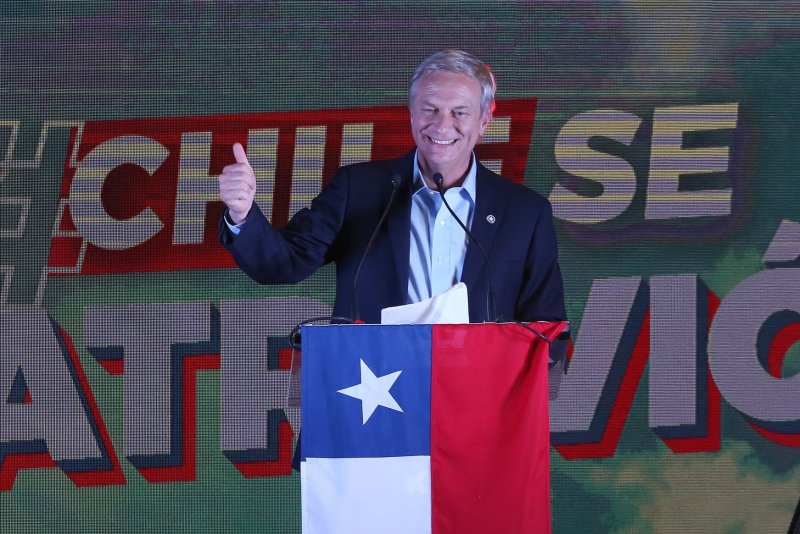 Far-right presidential candidate Jose Antonio Kast speaks to supporters on Sunday in Santiago, Chile, after learning that he will participate in a runoff election on December 19. Photo by Elvis Gonzalez/EPA-EFE

Nov. 22 (UPI) -- Chilean voters next month will choose their next president from two candidates -- one, a conservative lawmaker and military hawk, and the other a former student activist who would be the country's youngest modern president.

Jose Antonio Kast and Gabriel Boric won most of the votes in Chile's presidential election on Sunday, but neither won a majority of votes needed to win the presidency outright.

In a field of several candidates, Kast won about 28% and Boric 26%. Because neither candidate won 50% of the vote, there will be a runoff election on Dec. 19.

Kast is a devout Catholic and member of Chile's far-right Republican Party who has in the past defended Santiago's military dictatorship. His campaign focused mostly on immigration, security and conservative social values. He opposes same-sex marriage and abortion.

Boric, 35, is a member of the Social Convergence Party, a former student leader who supports social liberties. If elected, he would be Chile's youngest president in modern history.

Outgoing President Sebastian Pinera was impeached this month over the Pandora Papers scandal, but was acquitted in the Senate. Having already served two four-year terms, he is barred from running for re-election.

Protests in 2019 over inequality and the rising cost of living spurred delegates to start drafting a new Constitution in July. The coronavirus pandemic has also created shifts in Chile's political landscape.

World News // 16 hours ago
Russia-Ukraine war: Attack on Severodonetsk kills at least 6
May 21 (UPI) -- Russian attacks in and around the city of Severodonetsk in Ukraine's Luhansk region have killed at least six civilians, a Ukrainian official confirmed Saturday.