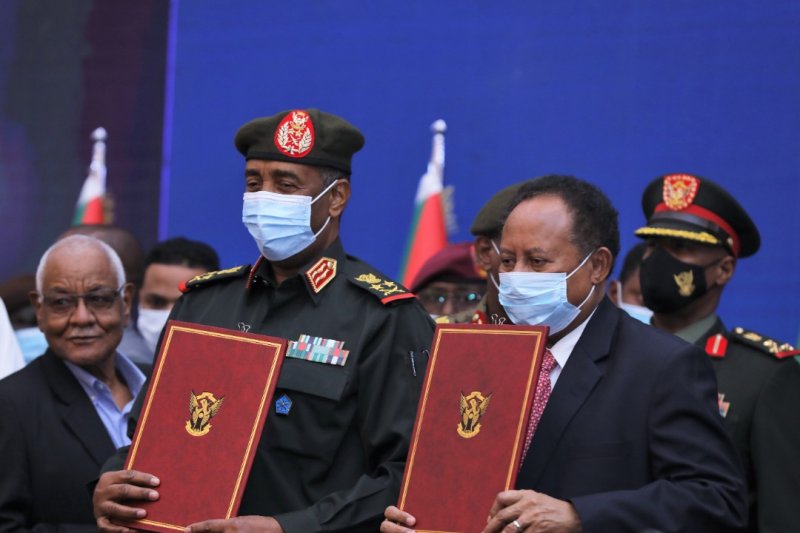 Sudan's military and civilian government on Sunday reached a deal to reinstate Prime Minister Abdalla Hamdok (R) after he was detained in a coup on Oct. 25. Photo by Republican Media Palace/EPA-EFE

Nov. 21 (UPI) -- Military and civilian leaders in Sudan reached a deal Sunday to reinstate Prime Minister Abdalla Hamdok after he was ousted in a coup last month.

Hamdok and the military's leader, Gen Abdel Fattah Al-Burhan, appeared together in a signing ceremony at the Presidential Palace where they agreed to a deal that would reinstate Hamdok as the leader of the transitional government and restore the Council of Ministers which was resolved in the Oct. 25 coup.

Political detainees jailed following the coup -- including government officials, politicians and protesters -- would also be released and a committee would be formed to investigate protests following the coup.

In addition, the deal calls for the creation of a unified army, and Sudan's constitution would be amended to include new articles explicitly outlining the partnership between civilians and military under the transitional government.

However, the growing protest movement in the nation rejected the deal, with the Sudanese Professionals Association, describing it as "treasonous" and "far from the aspiration of our people."

Sudan's Forces of Freedom and Change coalition also spoke out against the deal, saying there is "no negotiation, no partnership, nor legitimacy for the coup plotters."

"We have nothing to do in any agreement with this brutal gang, and we are working with all peaceful means to bring this (gang) down, working with all the forces of the revolution, professional groups, resistance committees and all the honorable people," the group said.

Hamdok, who took the place of deposed dictator Omar al-Bashir in April 2019, had been held on house arrest since the military seized control of the government on Oct. 25.

He was set to lead the country for 39 months until elections are held following the former dictatorship.

Senior officials at the U.S. State Department had been pushing for Hamdok to be returned to power, with top U.S. diplomat to Africa Molly Phee traveling to Khartoum last week to advance efforts to "support the democratic aspirations of the Sudanese people and to restore the country's civilian transition to democracy."

RELATED Number of forcibly displaced people jumped by 1.6M in first half of 2021 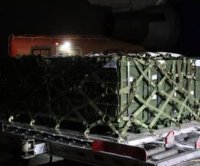 World News // 3 hours ago
U.S. delivers 'lethal' aid to Ukraine
Jan. 22 (UPI) -- The U.S. government delivered "lethal" aid to Ukraine as part of the first shipment of security assistance to defend against possible a Russian invasion, the U.S. Embassy in Kiev said.

World News // 23 hours ago
Airstrikes in Yemen leave dozens dead, nationwide Internet outage
Jan. 21 (UPI) -- More than 70 people were killed and hundreds of others injured during Saudi-led airstrikes in northern Yemen, according to officials on Friday.

World News // 23 hours ago
Hezbollah faces rising dissent, efforts to end Iran's 'occupation' of Lebanon
BEIRUT, Lebanon, Jan. 21 (UPI) -- Lebanon's financial collapse, which has pushed many into poverty, has also seen growing anger against Hezbollah, with more voices openly blaming it for the ongoing crisis and for its allegiance to Iran.