The United Nations has said more than 5.2 million people across Tigray are in urgent need of humanitarian assistance, including 400,000 people currently facing famine conditions. The Photo courtesy of World Food Program Ethiopia/Twitter

Sept. 30 (UPI) -- Ethiopia has ordered the expulsion of seven senior United Nations officials on accusations of "meddling in the internal affairs of the country," the ministry of foreign affairs said following criticism that the country has established a humanitarian blockade over the crisis-hit Tigray region.

The ministry sent the officials from the U.N.'s Children Fund and the U.N. Office for the Coordination of Humanitarian Affairs letters informing them that they have been designated "persona non grata" and have 72 hours to leave the country.

.@mfaethiopia declared "persona non grata" for seven individuals who have been working for some #UN humanitarian agencies in #Ethiopia for meddling in the internal affairs of the country. They must leave the country within the next 72 hrs. 30 September 2021 pic.twitter.com/IDHv6AD145— MFA Ethiopia (@mfaethiopia) September 30, 2021

Among those expelled include Grant Leaity, acting humanitarian coordinator for Ethiopia with the OCHA, who early this month warned that the war-torn Tigray region was under "a de facto humanitarian aid blockade."

Tigray, in northeastern Ethiopia, is at the center of fighting between the militaries of Ethiopia and Eritrea and the ethnic nationalist Tigray People's Liberation Front that erupted in November.

The United Nations has repeatedly said more than 5.2 million people across the state, equaling 90% of Tigray's population, are in urgent need of humanitarian assistance, including 400,000 people currently facing famine conditions with more than 100,000 children posed to suffer from life-threatening acute malnutrition in the next 12 months.

In his letter dated Sept. 2, Leaity said there is only one road into Tigray that humanitarian partners can use but long delays and clearance "render passage extremely difficult."

"Stocks of relief aid, cash and fuel are running very low or are completely depleted. Food stocks already ran out on 20 August. A minimum of 100 trucks of food, non-food items and fuel must enter Tigray every day to sustain an adequate response," he said, adding that between July 12 and Sept. 2, only 355 trucks had entered the region.

In the past three weeks, 171 trucks have entered Tigray, carrying a combined 6,150 metric tons of food for 360,000 people for one month, the WFP said via Twitter.

"It is vital we have a free flow of aid into northern Ethiopia to reach all in need," it said.

U.N. Secretary-General Antonio Guterres said in a statement Thursday that he was "shocked" that Ethiopia had designated his officials as persona non grata as they are delivering lifesaving aid to people in need in the country.

"I have full confidence in the U.N. staff who are in Ethiopia during this week," he said. "We are now engaging with the government of Ethiopia in the expectation that the concerned U.N. staff will be allowed to continue their important work."

"The expulsion is counterproductive to international efforts to keep civilians safe and deliver lifesaving humanitarian assistance to the millions in dire need," he said.

On Sept. 17, President Joe Biden signed an executive order permitting sanctions against leaders in Ethiopia over the fighting in Tigray.

"We will not hesitate to use this authority or other tools to respond to those who obstruct humanitarian assistance to the people of Ethiopia," he said.

World News // 36 minutes ago
Some foreign carriers cancel flights to U.S. over concerns about 5G rollout
Jan. 19 (UPI) -- Several carriers announced cancellations or modifications for flights to the U.S. on Wednesday due to concerns that the rollout of new 5G cellular services near some airports will interfere with aviation technologies. 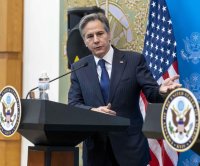