Sept. 28 (UPI) -- Typhoon Mindulle lost some strength on Monday but it remained a powerful storm, AccuWeather forecasters said. While the anticipated track of Mindulle, which became just the third super typhoon of the year over the weekend, is forecast to keep the storm away from any direct impacts to land, Mindulle could approach the Japanese coast this week.

After initially developing last week, Mindulle reached super-typhoon intensity on Sunday when its maximum 1-minute sustained winds reached 150 mph, according to the Joint Typhoon Warning Center. Winds of this strength are equivalent to a strong Category 4 hurricane on the Saffir-Simpson Hurricane Wind Scale, used mainly in the Atlantic and eastern Pacific basins.

Early Monday, Mindulle lost some wind intensity and was stripped of its super typhoon designation.

As of Tuesday afternoon, local time, Typhoon Mindulle was located in the Philippine Sea and was tracking to the northwest at 6 mph. According to the Japan Meteorological Agency, Mindulle had maximum 10-minute average sustained winds of 109 mph and was the equivalent of a Category 3 hurricane in the Atlantic and East Pacific basins. 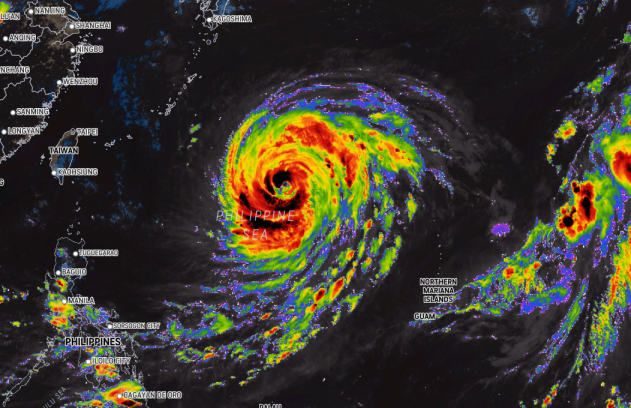 As Mindulle tracks across the Philippine Sea, it may restrengthen for a time early this week, said AccuWeather Senior Meteorologist Jason Nicholls.

The combination of favorable conditions along the storm's path, including warm water and light vertical wind shear, can allow for additional strengthening through the first half of the week. 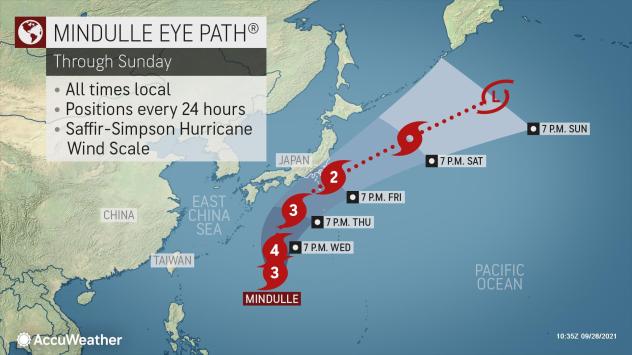 Even as the storm remains away from land through the middle of the week, seas will build across the Philippine Sea and can lead to dangerous boating conditions across the region.

Large swells can bring dangerous swimming conditions, including strong rip currents, to beaches across the western Pacific. Locations expected to have the most dangerous conditions include areas from the northeast Philippines to eastern Taiwan, as well as the Ryukyu Islands and mainland Japan, including the south and east coast of Kyushu, Shikoku and Honshu.

During its trek across the Philippine Sea, the storm is expected to slow and make a gradual turn to the north and eventually to the northeast this week.

"A slower turn to the northeast may result in the storm impacting southern Japan with heavy rain and gusty winds during the second half of the week," said Nicholls. "A quicker northeast turn could mean the outer bands just brush the southern coast of Japan."

As Mindulle makes a turn to the north and northeast, rain bands can begin to impact southern Japan around the middle of the week.

How close the typhoon ultimately tracks to these areas will determine how much rain and wind each area receives. Should the center track nearby, there could be flash flooding, mudslides and wind damage. 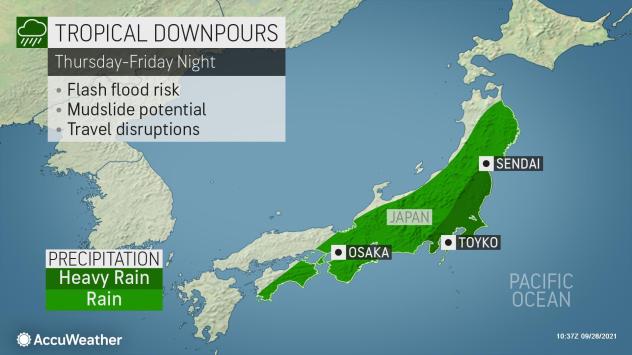 AccuWeather's current forecast predicts that bands of rain and wind will sweep across portions of Shikoku and Honshu from Thursday through Friday.

This can lead to the threat for isolated flash flooding, especially in the mountainous terrain across the region. With the center of Mindulle expected to pass to the south of Japan, wind damage is not expected to be a significant concern, though should the storm pass closer to land, this would become more of a concern.

Residents across southern Japan should continue to monitor the forecast and remain aware of the situation. Should the track of the storm approach closer to land, preparations should be rushed to completion in the coming days.

World News // 2 hours ago
Biden: Taiwan policy of 'strategic ambiguity' has not changed
SEOUL, May 24 (UPI) -- A day after sparking outrage by claiming the United States would intervene militarily to protect Taiwan, President Joe Biden said Washington's policy of "strategic ambiguity" toward defending the island had not changed.

World News // 15 hours ago
Global number of refugees, forcibly displaced people passes 100M
May 23 (UPI) -- The number of global refugees and people forcibly displaced from their homes passed 100 million for the first time amid the war in Ukraine and other conflicts, the United Nation's High Commissioner for Refugees said.

World News // 18 hours ago
5.5-magnitude quake strikes in Japan off coast of 2011 Fukushima disaster site
May 23 (UPI) -- Scientists say that a strong earthquake was recorded off the coast of Japan -- near Fukushima, which was the site of a nuclear accident a decade ago that was triggered by a quake.