Junta forces clear a barricade to move forward during a protest against the military coup in Mandalay, Myanmar, on February 28. File Photo by Xiao Long/UPI | License Photo

Myanmar riot police clear the barricade to move forward during a protest against the military coup in Mandalay, Myanmar, on February 28. File Photo by Xiao Long/UPI | License Photo

A Myanmar soldier is seen in Yangon, Myanmar, on February 2 following the military's takeover of the civilian government. File Photo by Xiao Long/UPI | License Photo

Sept. 23 (UPI) -- A United Nations authority to Myanmar says military forces that have taken over the Asian nation are abducting family members -- including young children -- as a tactic to compel fugitives to give themselves up.

Tom Andrews, U.N. special rapporteur to Myanmar, made the remarks Wednesday during testimony to the Human Rights Council.

The military junta took power in February and overthrew leader Aung San Suu Kyi and other civilian leaders, arguing that the election last fall that kept them in power was fraudulent.

Since the coup, Myanmar's military has charged the former leaders and targeted various others for arrest. Andrews said that "systematically" kidnapping relatives has increasingly become a tactic by the junta to persuade certain targets to surrender.

"I am afraid that the crisis in Myanmar has become even graver, with the continuing commission of mass atrocity crimes and a deadly escalation of armed conflict," he told the HRC. "The results have been catastrophic.

"Now the junta is increasingly relying on another depraved tactic, the use of collective punishment, including the abduction of family members of those who have been issued arrest warrants, but who police and military forces are unable to locate."

Andrews said nearly 200 people have been abducted, including some children as young as 20 weeks old.

Andrews' testimony was part of an update he gave the HRC on the humanitarian status in Myanmar, which has been under harsh military rule for nearly eight months.

"The junta has, in sum, directed its forces to engage in widespread and systematic attacks against the people of Myanmar," he said. "There is therefore a compelling case that the military junta is committing crimes against humanity."

Earlier this month, the main opposition movement in Myanmar called for a "resistance war" by the people against the military junta. Andrews said the move reflects the military's escalating violence in the country.

"The escalating violence in Myanmar, including reports of the killing of those accused of collaborating with the junta and members of their families, including young children, are deeply disturbing," he said. "I appeal to everyone to respect and abide by international human rights standards and humanitarian principles.

"What are we waiting for? The longer we delay, the more people die." 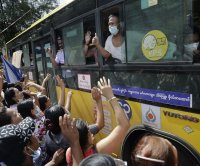 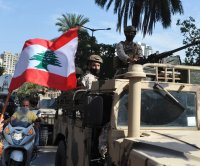