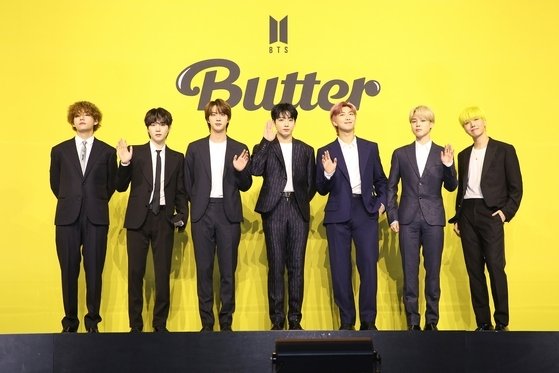 K-pop boy band BTS members pose at a press conference in Seoul at the release of a new single, "Butter" on May 21. File Photo courtesy of HYBE

SEOUL, Sept. 16 (UPI) -- South Korean President Moon Jae-in has named K-pop group BTS as special envoy ahead of their visit to the United Nations next week.

Moon made the designation of "special presidential envoy for future generations and culture" during a meeting at the Blue House on Tuesday. He asked the group to bolster South Korea's diplomatic efforts and global standing.

Moon is also scheduled to fly to New York on Sunday to address the U.N. General Assembly.

The appointment comes during a period of parliamentary discussion around whether BTS members are entitled to receive an exemption from mandatory military service.

All healthy Korean men between ages 18 and 30 are required to serve in the military for at least 18 months.

Athletes can avoid service if they win a medal at the Olympics or the Asian Games. Winners of international art competitions can also receive an exemption.

Winners of pop music rankings such as the Billboard charts have previously been left out of the exemption. Sung's bill proposes to change that.

"I think that BTS members have contributed to the country as much as Olympic medalists. Therefore, they deserve military exemption, and many fellow lawmakers agree with me," Sung told UPI News Korea. "I will put forth my best efforts to revise the law."

World News // 18 hours ago
Somali government says it has ousted Islamist militia from town
Oct. 23 (UPI) -- A regional government in Somalia says it's in control of a town in the central part of the country after a clash with an Islamist militia.

World News // 19 hours ago
Pakistani police clash with banned Islamist group seeking release of its leader
Oct. 23 (UPI) -- Supporters of a banned Islamist party in Pakistan have clashed with police and disrupted traffic during a march to the country's capital.