Sept. 9 (UPI) -- Former Afghan President Ashraf Ghani denied allegations that he stole money from the government last month when he fled the country as the Taliban bore down on the capitol Kabul.

In an English-language statement published Wednesday to his Twitter account, the 72-year-old former president called the allegations against him "baseless" and "completely and categorically false."

"Corruption is a plague that has crippled our country for decades and fighting corruption has been a central focus of my efforts as president," he said. "I inherited a monster that could not easily or quickly be defeated."

Ghani fled Afghanistan for the United Arab Emirates on Aug. 15 as the Taliban marched toward and then seized the capitol Kabul amid the U.S. military withdrawal.

In the wake of his exile, allegations emerged that he took millions from the government with him.

In the statement Wednesday, he said he would welcome an official audit under the U.N. auspices or another independent body.

"I have publicly declared all of my assets. My wife's family inheritance has also been disclosed and remains listed in her home country of Lebanon," he said. "My close aides are ready to submit their finances to public audit, and I would encourage and urge other former senior officials and political figures to do the same."

He also again apologized to the Afghan people for the dissolution of their democratic government while stating the reason he left the country was to prevent bloodshed.

"I left at the urging of the palace security who advised me that to remain risked setting off the same horrific street-to-street fighting the city had suffered during the civil war of the 1990s," he said. "Leaving Kabul was the most difficult decision of my life, but I believed it was the only way to keep the guns silent and save Kabul and her 6 million citizens."

He also denied the allegations that he stole money, saying, "I came just with my clothes, and I was not even able to bring my library."

In an interview with TOLO News on Wednesday, Secretary of State Antony Blinken said the United States did not help nor was aware of Ghani leaving the country but he did speak with the then-president on the phone before he left Afghanistan.

"What he told me in that conversation the night before he fled is that, as he put it, he was prepared to fight to the death," he said. "In less than 24 hours, he'd left Afghanistan. So no, I certainly didn't know about it, and we certainly did nothing to facilitate it."

Asked if Ghani left with millions of dollars, Blinken said, "that, I don't know."

"What I do know is that he left the country, and again, in a very short period of time," he said. "The security forces as an institution collapsed and so did the government."

World News // 5 hours ago
WHO says syringe shortage could hinder COVID-19 fight in Africa
Oct. 28 (UPI) -- The World Health Organization said Thursday that a shortage of syringes in Africa could hinder the fight against COVID-19 on the continent. 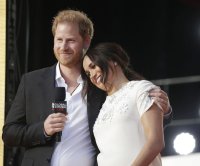 World News // 18 hours ago
African Union suspends Sudan; World Bank pauses funds over coup
Oct. 27 (UPI) -- Resistance and condemnation of the military coup of Sudan grew at home and abroad on Wednesday as the African Union suspended the country's membership and protests continued within its borders.

World News // 1 day ago
Iran says it will resume nuclear talks
Oct. 27 (UPI) -- Iran will resume talks on its nuclear program in November, the country's top nuclear negotiator said Wednesday, but it's unclear if the United States will participate.