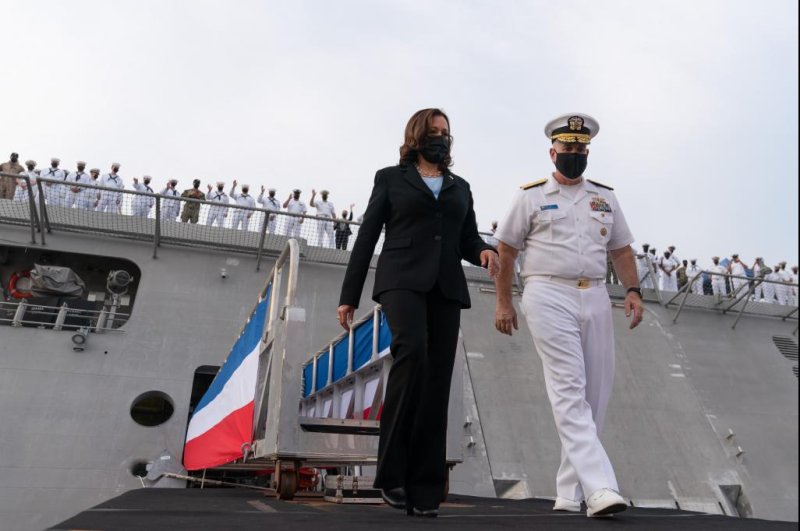 Aug. 24 (UPI) -- U.S. Vice President Kamala Harris traveled from Singapore to Vietnam on Tuesday after a delay of a few hours due to a mysterious health threat that resembled Havana Syndrome, officials said.

Harris' arrival in Hanoi was delayed by about three hours due to the threat.

Communications officer Symone Sanders said Harris was not affected by the issue.

Havana Syndrome was first discovered in Cuba about five years ago and is described as "sonic attacks" that cause debilitating symptoms with ultrasound energy.

Earlier Tuesday in Singapore, Harris reaffirmed the United States' commitment to allies in Southeast Asia in the face of Chinese aggression in the region.

Harris laid out a U.S. vision for a free and open Indo-Pacific in a speech at Singapore's Gardens by the Bay waterfront park. She said the region is critical to U.S. security and prosperity.

The United States, she said, will continue to work with Southeast Asian partners and multilateral organizations to uphold that vision and deepen relations.

"In this region, we have long put forward a vision of peace and stability: freedom on the seas, unimpeded commerce, advancing human rights, a commitment to the international rules-based order and a recognition that our common interests are not zero-sum," she said. "Now, as we face threats to that order, I am here to reaffirm our commitment to that vision, to strengthen it and to make sure it addresses the challenges of today and of tomorrow."

The United States is committed to security in the region, including freedom of navigation that sees billions of dollars in goods each day flow through the South China Sea, where China has laid sweeping claims, despite being rejected as unlawful by a 2016 tribunal.

Beijing's claims have sparked disputes with neighboring countries, in particular the Philippines and Vietnam, and the United States has accused China of building artificial islands in the sea since 2013 to use as military outposts.

Harris said Beijing continues "to coerce, to intimidate and make claims to the vast majority of the East China Sea" and the actions "undermine the rules-based order and threaten the sovereignty of nations."

Harris was also quick to note that the U.S. vision doesn't target any one nation or force nations to choose. Singapore has remained neutral amid the U.S.-China conflict.

World News // 4 hours ago
Hurricane Rick swirls to life, expected to strengthen and target Mexico
Mexico's southwestern Pacific coast will need to remain on high alert through the weekend as newly formed Hurricane Rick has churned up in the warm tropical waters of the eastern Pacific Ocean.