Aug. 9 (UPI) -- The South Korean suspects who were arrested and charged with spying for Pyongyang received funding from North Korea after making contact with North Koreans in China, according to South Korean press reports.

Park, one of the defendants, met with representatives of Pyongyang's Cultural Exchange Bureau in May 2017 in Beijing, South Korean network KBS reported Monday.

Park was instructed to create an underground organization and form a group, the "North Chungcheong Province Branch for Independent Unification" to draw public attention, the report said.

The group, which includes four main suspects, received a total of 84 directives from the North beginning in June 2017, the report said, citing information from Seoul's National Intelligence Service.

The service is retaining the flash drive that was uncovered at a suspect's residence, according to the report.

North Korea also may have used the group to collect information about the South's politicians ahead of the country's legislative election last year.

An arrest warrant obtained by KBS said that in February 2020 the group was asked to track down information on members of the ruling and opposition parties in the South.

One of the suspects with the surname Yoon interviewed a member of the ruling Democratic Party in North Chungcheong Province to comply with the North Korean order.

According to KBS, Yoon was arrested a month after receiving instructions -- indicating some suspects were first detained last year.

North Korea may also have financed the group's activities.

The suspects, who held rallies against U.S. weapons acquisition, were charged July 27 with violating South Korea's anti-Pyongyang National Security Law. The defendants illegally met with North Korean agents and praised the regime in Pyongyang, according to Seoul's spy agency.

Group members have denied the charges and said they are the victims of a government conspiracy. 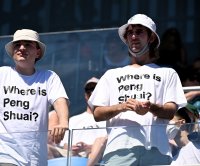