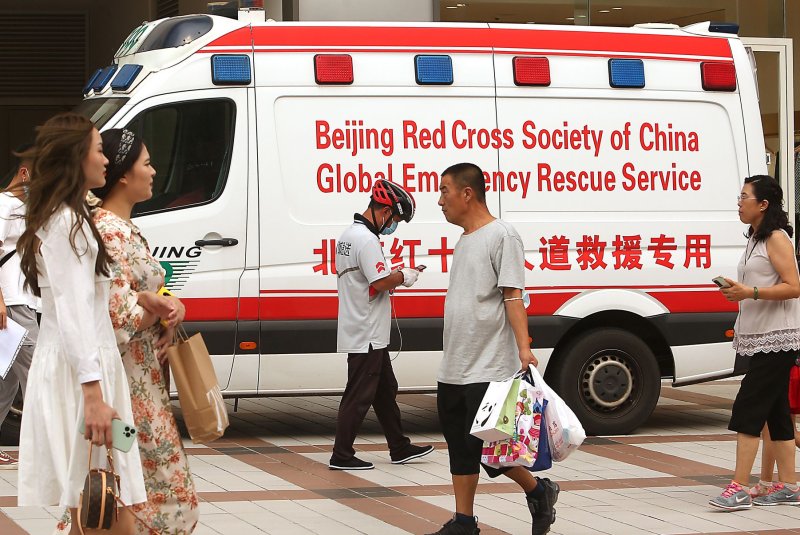 Aug. 9 (UPI) -- Chinese authorities are enforcing restrictions on movement in major cities as the country grapples with the biggest spike in COVID-19 infections since the beginning of the pandemic.

China confirmed late Monday 125 new cases of the novel coronavirus nationwide amid the spread of the highly contagious Delta variant, including in the eastern city of Yangzhou in Jiangsu Province.

Authorities identified a COVID-19 cluster after an infected individual with the surname Wang came into close contact with 23 individuals, according to the Commission for Discipline Inspection of Yangzhou City on Monday.

Authorities "disciplined" local officials who are being charged with allowing the disease to spread and for not isolating Wang after he allegedly tested positive for the virus as early as July 29, the Commission said.

Local digital media outlet Pengpai reported that Wang played cards last month at a mahjong club about the time he may have been infectious.

Cities in China have ordered mass testing of residents in response to the unprecedented spread of the Delta variant.

In Nanjing, 15 local Chinese Communist Party officials were blamed for failing to prevent an outbreak that began at a city airport, according to the Party's anti-graft watchdog, the Financial Times reported Monday.

Last month, the airport was linked to the latest wave of outbreaks. People who visited the Nanjing airport reportedly flew to other parts of the country.

China has made no changes to plans to host the 2022 Winter Olympics in Beijing and has pursued a policy of lockdowns, strict border control and mass testing.

The country's policy remains susceptible to fast-spreading viruses, however.

"China will have to pivot from its containment strategy, sooner or later," said Chen Zhengming, an epidemiology professor at the University of Oxford, according to Bloomberg.

World News // 6 hours ago
New Zealand designates Proud Boys, The Base as terrorist groups
June 29 (UPI) -- New Zealand has quietly designated the Proud Boys and The Base, two right-wing extremist groups in the United States, as terrorist organizations.

World News // 23 hours ago
15,000 people remain in Lysychansk; death toll in Ukrainian mall attack rises
June 29 (UPI) -- Amid a key NATO summit in Spain on Wednesday, Ukrainian forces dug into Lysychansk in an effort to buy time to be resupplied with weapons from the defensive alliance in the latest round of fighting.