Aug. 2 (UPI) -- North Korea released video footage of an intercontinental ballistic missile launch but the image may have been manipulated, according to a South Korean press report.

Display of North Korean missile capability comes as barges that handle North Korea's submarine-launched ballistic missiles are returning to the center of activity.

Pyongyang's Korea Central Television recently aired a program showing the takeoff of the Hwasong-15, a long-range missile. The brief segment was included in a report on a concert for military officials, Yonhap reported Monday.

North Korean state media on Friday showed the missile being launched while producing a plume of exhaust. A road-mobile launcher used in transporting the weapon is not visible in the video, according to Yonhap.

The Kim Jong Un regime launched the Hwasong-15 on Nov. 29, 2017. North Korea used a road-mobile launcher at the time to transport the missile to a launch pad. The footage released Friday may have not shown the same weapon deployed in 2017, and if the Hwasong-15 was tested after 2017, it likely would have been detected in the South, according to Yonhap.

Pyongyang also may not have the capability to launch ICBMs from a road-mobile launcher, which would enable the regime to fire faster and launch a surprise attack, reducing reaction time.

In November 2019, South Korea's Defense Intelligence Agency said that the North likely did not have the ability launch ICBMs from transporter erector launchers.

Analyst Peter Makowsky said in an analysis on 38 North that activity around test barges "appears to have been for either maintenance or a possible refitting to prepare the barges for handling a new generation of submarine-launched ballistic missiles." 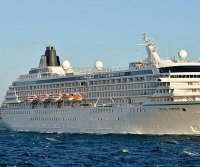 World News // 5 hours ago
COVID-19 cases subside to 8% weekly rise but India, Brazil, Japan surge
Jan. 23 (UPI) -- Two months after the COVID-19 Omicron variant was first reported in South Africa, cases have subsided to an 8% weekly rise, including decreases in some world hotspots but spikes in India, Brazil and Japan.

World News // 9 hours ago
French adventurer, 75, dies while rowing across Atlantic Ocean
Jan. 23 (UPI) -- Jean-Jacques Savin had activated two beacons on Friday to alert his team that he was experiencing "great difficulty" before losing contact with them.