On July 1, 2020, the first day Beijing's national security law went into effect in Hong Kong, police waved a flag through pro-democracy protests warning them that carrying signs calling for Hong Kong's independence was not illegal. On Tuesday, a protester who was arrested that day for waving a supposedly pro-democracy flag became the first person sentenced under the new law. Photo courtesy of Hong Kong Police/Facebook

The case is expected to stand as precedent as the government moves to try the more than 115 people charged under the controversial national security law that went into effect July 1, 2020, which has been widely criticized by Western nations.

Police arrested Tong the same day the law went into effect. He was driving his motorcycle through a neighborhood with a banner that read "Liberate Hong Kong Revolution of our Times" and was apprehended after colliding with police who were attempting to stop him.

The judges found Tong guilty of committing national security charges as displaying the banner "was capable of inciting others to commit secession," which they said was his intention, while his failure to stop for police attempting to detain him "was a deliberate challenge mounted against police, a symbol of Hong Kong's law and order."

Much of the case hinged on the meaning of his slogan. The defense had argued that the slogan contained several possible meanings with no one single interpretation to be understood by all who saw it mounted on his motorcycle that day.

They also argued there was no evidence that he did anything to incite others to commit crimes, let alone to encourage people to fight for Hong Kong's secession.

However, the judges ruled that the slogan was "at the very least capable" of promoting Hong Kong's independence from China and that due to the circumstances "it is not necessary for the court to resolve the differences" between the slogan's possible interpretations.

"[W]e have no difficulty in coming to the sure conclusion that the Slogan as at 1 July 2020 was capable of carrying the meaning of separating the HKSAR from the PRC and was capable of inciting others to commit secession," the judges said in the ruling.

The law was imposed last summer following a year of mass pro-democracy demonstrations that at times brought the former British colony to a standstill.

To Western nations and human rights organizations, the national security law was intended to stamp out similar movements before they began, with many protest leaders and pro-democracy politicians either being arrested or fleeing the country.

The ruling on Tuesday is expected to attract further international condemnation as well as potential punitive measures, such as the sanctions the United States has imposed upon Chinese officials they deem responsible.

Amnesty International warned Tong's conviction was "a significant and ominous moment" for human rights in Hong Kong" as it underlines the fact that expressing political opinions now amounts to a crime punishable with steep sentences including life imprisonment.

"To convict Tong Ying-kit of 'secession' for displaying a flag bearing a widely used political slogan is a violation of international law, under which expression must not be criminalized unless it poses a concrete threat," Yamini Mishra, the Asia-Pacific regional director of Amnesty International, said in a statement. "This feels like the beginning of the end for freedom of expression in Hong Kong."

World News // 20 minutes ago
Australia, Britain, Canada follow U.S. with Beijing Winter Olympics boycott
Dec. 9 (UPI) -- Australia, Canada and Britain have followed the United States in ordering a diplomatic boycott of the upcoming Winter Olympics in Beijing, and drew a similarly stern rebuke from the Chinese government on Thursday. 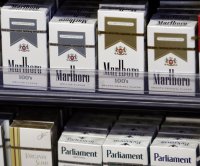 World News // 2 hours ago
Under proposal, young New Zealanders would be banned from smoking for life
Dec. 9 (UPI) -- New Zealand unveiled a lofty plan Thursday that's designed to protect young people from the dangers of smoking -- a ban on cigarettes for as long as they live.

World News // 12 hours ago
Storm Barra crashes into Ireland, Britain with deadly force
The second named windstorm in less than two weeks reached bomb cyclone status prior to striking portions of Ireland and Britain with a fury Tuesday into Wednesday.

World News // 20 hours ago
Biden says he isn't considering sending U.S. troops to Ukraine
Dec. 8 (UPI) -- President Joe Biden said Wednesday that sending troops to Ukraine is "not on the table" after his high-stakes virtual summit with President Vladimir Putin on Tuesday.

World News // 1 day ago
'Zombie fires' burn despite temperatures plunging to 74 degrees below zero
Bone-chilling conditions are being reported across parts of Siberia, which has been experiencing some of the coldest air on Earth in recent days. Yet "zombie fires" continue to burn beneath the frozen landscape.