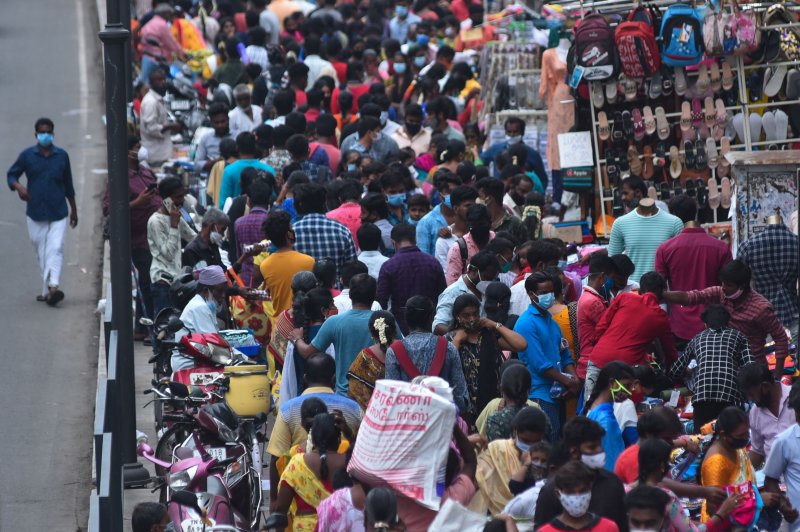 July 11 (UPI) -- Coronavirus is surging in the world with a 12% weekly rise in infections and 1% gain in deaths after the outbreak had been largely contained with restrictions and vaccines.

One and a half years after the virus originated in Mainland China, the death toll has risen to 4,048,919 and cases are at 187,617,642 through Sunday, according to tracking by Worldometers.info.

The death toll has risen on every continent except North America and South America. Indonesia produced the most deaths with 1,007 followed by India with 895.

Three Asian nations are in the top 20 for most deaths. Besides India, Iran is 12th place and Indonesia 16th.

Asia is lagging in vaccines.

North America leads with 76 doses administered per 100 people, followed by Europe at 74, South America at 48, Asia at 46, Oceania at 25 and Africa at 4, according to tracking by The New York Times.

Worldwide, a total of 3.39 billion shots have been given in a population of 7.9 billion with a two-dose regimen required for most brands, according to tracking by Bloomberg.

The United States has administered at least one dose to 55.5% of its population with Brazil at 40.5%. Britain, which inoculated the first person in the world in December, is among the best in the world with 68.5%. China doesn't report dose percentages but has enough for 48.8% of the world-high 1.5 billion people.

India is a dominant manufacturer of vaccines worldwide, but the nation has inoculated only 22% of its population with at least one dose. And Indonesia is 13.6%.

In India, coronavirus has been trending down from a world record of 4,529 deaths and world cases mark of 414,188. India had the most in the world Saturday with 1,206.

In the fallout from a huge spike in cases, deaths and overwhelmed hospitals, Indian Prime Minister Narendra Modi asked Health Minister Harsh Vardhan to step down along with his deputy. In all, the prime minister dropped 12 members of his cabinet.

"They (the government) don't admit to failure, but this is a way to ensure accountability. This is one way to send a message not only to the health ministry but others in the cabinet that performance matters," said Niranjan Sahoo, a senior fellow with the Observer Research Foundation, told CNN.

Indonesia's medical system has been strained. Hospital bed occupancy rates in many areas already exceed 100%, and more than 30 patients died in a Yogyakarta hospital last week after it briefly ran out of oxygen supply, CNN Indonesia reported.

Israel, which is considered part of Asia, has fully vaccinated 63.2% of its population. Its death toll is 6,436 with seven reported in a week and one Sunday. Israel recorded 84 cases Sunday and infections are up 73% in the week with 3,163. With the variant from India spiking in the nation, officials have reinstituted mask-wearing indoors and tightened border controls.

On Friday, the ministry announced that all travelers arriving in Israel must quarantine for 24 hours or until they produce a negative coronavirus test result.

In Japan, the Summer Olympics are scheduled to take place on July 27 with the host city Tokyo under a state of emergency. Last week, the government announced there will be no spectators weeks after foreign ones were banned. Also last week, three other prefectures were included, with two more added Saturday. Fukushima prefecture in northeastern Japan won't allow fans at baseball and softball events, and the northern prefecture of Hokkaido will have soccer games without fans at the Sapporo Dome.

Restrictions in the greater Seoul area of South Korea have been extended. Starting Monday and lasting two weeks, social distancing rules are at the highest level with night-time entertainment businesses ordered to close and gatherings of three or more people after 6 p.m. banned.

The pandemic outbreak began in late 2019 in Mainland China, but the nation with the world's largest population of 1.5 billion, has reported only a few deaths in the past 12 months and stands in 66th at 4,636 behind Kazakhstan with 4,647. China added 24 cases Sunday and had administered nearly 1.4 billion doses, the most in the world and dwarfing India with around 379 million and the United States with 332 million, according to tracking by Johns Hopkins.

The Federal Statistics Service said Friday it had recorded around 290,000 COVID-19 related deaths through May.

The nation has vaccinated only 20.4% of its population with one dose and 10.4% are fully vaccinated.

Besides the Sputnik V vaccine, there are two others made in Russia.

Russia has resumed regular air travel including to the United States and China.

European nations are opening travel, including launching on July 1 a Digital Covid Certificate, which allows for free movement of travelers between its countries.

The 27-nation European Union has recommended the United States among countries for which travel restrictions should be lifted. Also included is Saudi Arabia despite a spike in cases and deaths.

But residents of 29-nation Europe's Schengen area, as well as those in Britain and and Ireland, remain barred from traveling to the United States unless they are a U.S. citizen or they spend 14 days before arrival in a country that is not on the Centers for Disease Control and Prevention's prohibited list.

The British government has placed most nations on a COVID-safe travel list.

For the first time since the pandemic, French nightclubs reopened Friday to people who are vaccinated or can provide proof of a negative test.

Colombia reported 528 deaths Sunrday, which was fifth in the world, and Argentina added 280 in sixth. Peru gained 165 Saturday.

"We found a huge number of child deaths from COVID and we started to compare to the U.S." Fatima Marinho, a senior technical adviser in Brazil for Vital Strategies, a non-profit organization, told The National. "We found we have much more, more than 10 times the number of deaths compared to the U.S."

Schools have been closed with lack of quality healthcare, crowded housing and malnutrition cited as causes for the number of young children afflicted.

Mexico's vaccination rate is 27.1%, though it was the first Latin American nation to begin vaccinating people. And Canada has risen to 68.8% and leading the United States by more than 13% after lagging by several points for months.

Canada, Mexico and the United States have mutual travel bans for non-essential travel through July 21. It began one year ago in March.

Last week, fully vaccinated Canadians and permanent residents will be able to skip the 14-day travel quarantine upon return to the nation.

In Mexico, most regions don't have restrictions. But Baja California Sur is planning social distancing rules including tourist hotspots of Los Cabos and La Paz. In Yucatan, which includes Cancun and Cozumel, some beaches in the state would be closed on weekends.

New Zealand's deaths remain at 26 with the last one reported on Feb. 16 and Australia's toll increased to 911 Sunday, after the last one was reported April 13.

The government of New South Wales, including Sydney, expects a lockdown, which has been in effect for three weeks, past Friday. It reported 77 cases Sunday.

The outbreak also has been surging in Fiji with 55 total deaths, compared with 30 one week ago and four by May 3. Case have climbed from 121 on May 3 to 10,512, including a record 485 Sunday. All workers must be vaccinated with the first-shot rate 30.4%.

"Patients are being brought in in cars with desperately ill patients who have been turned away from other hospitals with no beds."

South Africa has vaccinated 6.4% of its population with at least one shot up from 3.9% the week before.

World News // 26 minutes ago
New York, Singapore top list of world's most expensive cities in which to live
Dec. 1 (UPI) -- There is a cost of living crisis in major cities across the world, and none are more affected than New York City, which is now tied with Singapore as the most expensive city to live in.

World News // 7 hours ago
President of South Africa faces impeachment over 'Farmgate' scandal
Dec. 1 (UPI) -- South Africa's president faces impeachment after an independent investigation determined he allegedly tried to cover up a $4 million heist at his farm two years ago in an effort to abscond with the loot.