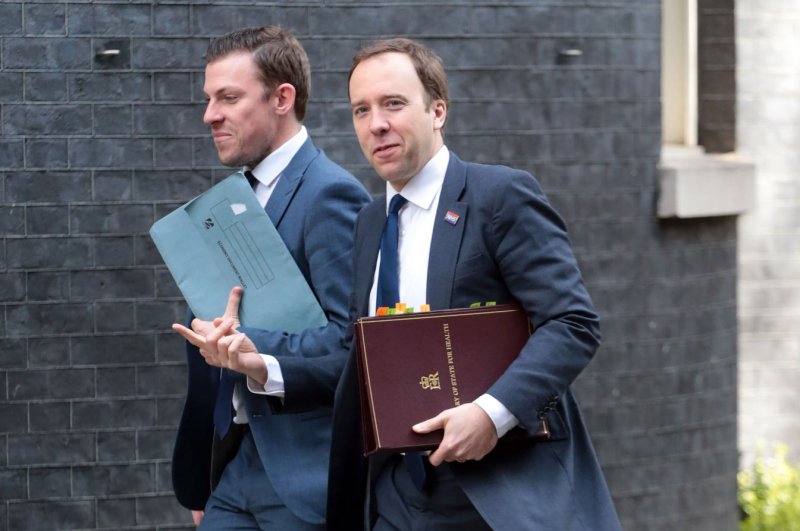 British Health Minister Matt Hancock leaves No.10 Downing Street in London on April 3, 2019. He resigned as health minister on Saturday after he was caught breaking coronavirus protocols in May. File photo by Hugo Philpott/UPI | License Photo

Matt Hancock, who was already under fire for his response to the pandemic, was captured on CCTV footage on May 6 kissing aide Gina Coladangelo against social distancing rules. File photo by Hugo Philpott/UPI | License Photo

British Prime Minister Boris Johnson accepted Matt Hancock's resignation on Saturday, telling him he should be proud for the work he has done in the office. File photo by Hugo Philpott/UPI | License Photo

Britain started to relieve many of its coronavirus restrictions in late May. Photo by Andy Rain/EPA-EFE

June 26 (UPI) -- British Health Minister Matt Hancock resigned Saturday after a video surfaced of him breaking social distancing protocols in May while the government was urging people to abide by them to stop the spread of COVID-19.

Hancock, who was already under fire for his response to the pandemic, was captured on CCTV footage on May 6 kissing aide Gina Coladangelo when Britons were being told not to even hug people outside of their household.

Britain had not yet started to considerably ease its restrictions for most places nationwide allowing people to gather, socialize, eat and attend pubs indoors when Hancock was caught on camera.

His relationship with Coladangelo had been under scrutiny by officials at that point as well.

"The last thing I want is for my private life to distract from the single-minded focus that is leading us out of this crisis," Hancock wrote in his resignation letter to Prime Minister Boris Johnson. "We owe it to people who have sacrificed so much in this pandemic to be honest when we have let them down."

Johnson wrote back in response, saying, "You should leave office very proud of what you have achieved -- not just in tackling the pandemic, but even before Covid-19 struck us."

"Matt Hancock is right to resign. But Boris Johnson should have sacked him," tweeted Labor Party leader Keir Starmer.

World News // 5 minutes ago
COVID-19: Russia records 700+ deaths daily since July; global toll down 10%
Sept. 26 (UPI) -- Russia remains a coronavirus hotspot as deaths have surpassed 700 every day since early July while the world toll dropped 10% and case were down 12% in one week.

World News // 4 hours ago
Five Palestinians killed during Israeli raids in West Bank
Sept. 26 (UPI) -- Five Palestinians, including a 16-year-old, were killed and two Israel Defense Forces military personnel seriously injured while Israel attempted to stop a cell that was planned on executing a terrorist attack in the West Bank.

World News // 22 hours ago
Iceland holds elections with record number of parties expected to take power
Sept. 25 (UPI) -- Icelanders went to the polls on Saturday with a record nine parties likely to be seated in the country's parliament.