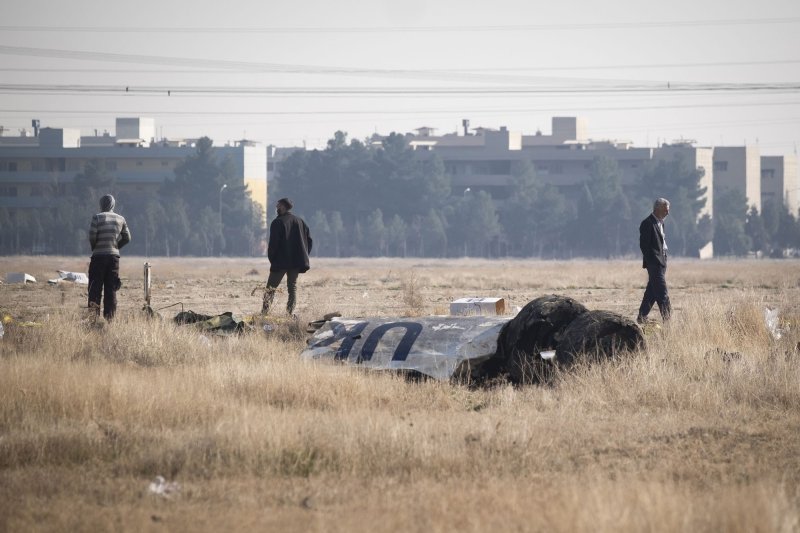 Canada said Thursday it holds Iran wholly responsible for the deaths of 176 people on board the airliner its military shot down on Jan. 8, 2020. Photo by Morteza Nikoubazi/UPI | License Photo

June 25 (UPI) -- Iran's high-ranking civilian and military authorities are "fully responsible" for shooting down a Ukrainian passenger jet early last year, killing all on board, a new report published by the Canadian government said, stating it will seek reparations for the victims' families.

The report, produced by the Canadian Forensic Examination and Assessment Team and published Thursday, said Canada holds Iran responsible for downing Flight 752 on Jan. 8, 2020, killing 176 people on board, among whom were 55 Canadian citizens and 30 permanent residents.

The plane was shot down early Jan. 8 shortly after takeoff from Imam Khomeini International Airport near Tehran while the country was on high alert, anticipating a retaliatory attack by the United States after it launched a premeditated strike against U.S. positions in Iraq.

Iran has blamed the shootdown on "human error," claiming the operator of a surface-to-air missile launcher misidentified the departing plane for an incoming threat. In April, Tehran indicted 10 in connection to the incident.

Canada said in its report that Iran's explanation is evasive, lacks context and "fails to address the full breadth of causes and contributing factors that led to the downing."

"Iran's account of events to date has been wholly inadequate," the report said. "While the forensic team believes that target misidentification was one of the causes, the Iranian government cannot expect the international community to set aside the other clear, immediate and systemic causes and contributing factors."

The report said that while investigators found no evidence that the shootdown was premeditated, it "in no way absolves Iran of its responsibility for the death of 176 innocent people."

Garneau said during a press conference that the forensic team was established knowing that they couldn't solely rely on Iran to find the answers behind the causes of the tragedy.

The foreign minister listed three main contributing factors the forensic team found that lead to the downing of the plane, starting with Iran failing to secure its airspace or warn flight companies of the security situation. The surface-to-air missile launcher operator also made a series of "extremely flawed decisions" that should have been avoided, while Iran's military failed to put in place necessary measures to prevent the disaster.

Canada is demanding from Iran a full accounting of the events that caused the shootdown, complete transparency about the ongoing criminal trials and concrete guarantees that measures have been put in place to prevent future tragedies, Garneau said, adding a notice of claim has also been filed, which is the first step to negotiations with Iran for reparations.

The reparations will be "vigorously" pursued, Ottawa said, adding that Tehran owes answers both to the victims' loved ones so they can achieve closure and to the world, which cannot have confidence in its airspace being safe until it does.

"The families and loved ones of the victims deserve a full explanation of Iran's dangerous and deliberate choice to keeps its airspace open, and a full accounting of the Iranian military's training and command and control procedures for anti-aircraft operations," Trudeau said in the joint statement. "Iran has not addressed the numerous deficiencies the forensic team has identified."

World News // 15 hours ago
Burkina Faso army sizes gov't in a coup, detains president
Jan. 24 (UPI) -- Troops have detained Burkina Faso President Roch Marc Christian Kabore and his whereabouts were not known on Monday after gunfire was heard in military camps in the West African country the day before.