Demonstrators display placards during a protest against the military coup in the outskirts of Yangon, Myanmar, in March. The European Union on Monday imposed its third round of sanctions since the junta seized control of the government Feb. 1 in a coup. Photo by EPA-EFE

June 21 (UPI) -- The European Union imposed a third round of sanctions targeting government officials and state-owned corporations on Monday over the military junta's February coup and subsequent bloody crackdown on protesters.

The EU named eight people including ministers, deputy ministers and the attorney general for sanctions, immediately freezing their assets and denying others from conducting financial transactions with them.

Myanma Gems Enterprise, Myanma Timber Enterprise and the Forest Products Joint Venture Corporation Limited were also hit with sanctions for being either state-owned or controlled by the Myanmar Armed Forces known as the Tatmadaw and for contributing to the military's revenue.

"By targeting the gems and timber sectors, these measures are aimed at restricting the junta's ability to profit from Myanmar's natural resources, while being crafted so as to avoid undue harm to the people of Myanmar," the EU said in a statement.

The EU has imposed sanctions twice before, once in February and once in March. Including those sanctioned Monday, the EU has designated a total of 43 people and six entities "for undermining democracy and the rule of law and for serious human rights violations in the country."

The military junta conducted a coup the morning of Feb. 1, arresting elected officials, such as Myanmar's civilian leader Daw Aung San Suu Kyi, imposing a yearlong state of emergency and appointing itself the State Administrative Council to oversee the governing of the nation.

The junta conducted the coup on claims of irregularities in parliamentary elections held in November despite international observers stating no evidence of fraud and that citizens were able to "freely express their will at the polls," as the U.S.-based Carter Center said days after the election was held.

Since the coup, protesters have taken to the streets of Myanmar, but they have been met with an increasingly violent crackdown with Myanmar's Assistance Association for Political Prisoners tabulating a death toll of more than 870 people killed by the junta and more than 5,040 arrested, charged or detained.

Britain on Monday also announced it sixth round of sanctions against Myanmar, freezing the assets of Myanma Timber Enterprise and Myanmar Pearl Enterprise.

"The military has continued its subversion of democracy and brutal killing of civilians," Foreign Secretary Dominic Raab said in a statement. "We will continue to hold the junta to account and sanction those responsible, until democracy is restored."

The United States, Canada and others have imposed sanctions and tightened export restrictions on Myanmar with seemingly little effect.

Dr. Sasa, the National Unity Government's minister for international cooperation and a former special envoy to the United Nations for Myanmar, said he "greatly welcomes" the EU's targeted sanctions and called on other nations to join the 27-member bloc.

"We especially urge all nations to completely cease engagement with the military and all its entities, both directly and indirectly, and put yet tougher coordinate, targeted and more widespread sanctions both diplomatically and economically," he said in a statement. "Every moment that these tougher measures are delayed, more and more lives are lost, and thousands are displaced from their homes in Myanmar, losing everything they own."

Tom Andrews, the U.N. special rapporteur on the situation for human rights in Myanmar, similarly welcomed the punitive members against the gem and timber companies but called for more entities to be sanctioned.

"Myanmar Oil & Gas should be next and all global sanctions should be linked into a powerful whole for maximum leverage on the junta," he said via Twitter. 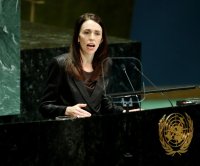 World News // 11 hours ago
French adventurer, 75, dies while rowing across Atlantic Ocean
Jan. 23 (UPI) -- Jean-Jacques Savin had activated two beacons on Friday to alert his team that he was experiencing "great difficulty" before losing contact with them.