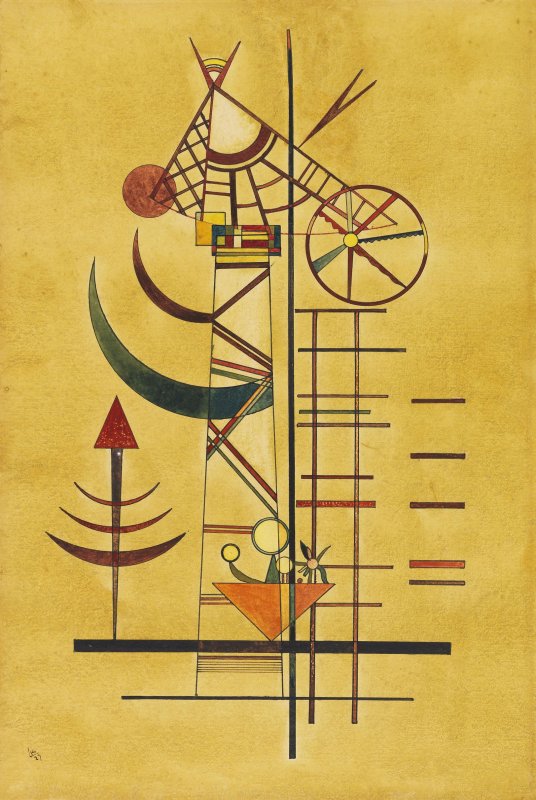 The 1927 Wassily Kandinsky painting, "Gebogene Spitzen (Curved Tips)," was believed to be lost, but turned up after 70 years in the estate of a German collector. File Image courtesy of Ketterer Kunst

June 22 (UPI) -- A watercolor painting by Russian artist Wassily Kandinsky believed to be lost for more than seven decades has sold at auction for $1.4 million.

The painting, Gebogene Spitzen (Curved Tips), was painted in 1927 when the expressionist taught at the Bauhaus German school of art.

After being recorded as sold in 1949, art historians became unsure of its location. The only proof of its existence was a small sketch of it in a list of his artworks by art historian Vivian Endicott Barnett.

Munich auction house Ketterer Kunst said the painting then surfaced in the estate of a private German collector in May.

"I am all the more delighted that we were able to identify such an outstanding work," auction house owner Robert Ketterer said of the work. "Many Kandinsky experts did research into the work, however, its exact appearance and whereabouts remained a mystery for decades."

A Berlin collector purchased the painting Saturday at auction.

Kandinsky was known as a pioneer of abstract painting, leaning heavily on bright color palettes and geometric figures.

World News // 3 hours ago
Greta Thunberg, activists in 70 nations call for urgent action against climate change
Sept. 24 (UPI) -- Fridays for Future, an environmental movement for action to fight climate change, organized rallies in dozens of countries on Friday in the first mass event for the cause since the COVID-19 pandemic began.

World News // 21 hours ago
Sam becomes 7th hurricane of 2021 Atlantic season, could impact U.S.
Sept. 24 (UPI) -- Tropical Storm Sam has strengthened into a hurricane in the Atlantic and is projected to become a major hurricane in the coming days, forecasters said Friday.

World News // 19 hours ago
Report: Britain paid compensation for nearly 300 Afghan civilian deaths
Sept. 23 (UPI) -- The British government paid $944,348 in compensation for the deaths of 86 children and 203 adult civilians at the hands of British forces in Afghanistan, according to a report released Thursday.