June 15 (UPI) -- Britain on Tuesday brokered its first free trade deal since leaving the European Union 18 months ago by signing a what it called a historic new agreement with Australia.

The deal eliminates all tariffs between the two nations and affects items like vehicles and liquor, the British government said. London said the deal also lets Britons live and work in Australia without barriers, and vice versa.

Officials said a final "agreement in principle" is expected in the coming days.

Trade between Britain and Australia generated almost $20 billion in 2020, during a year that was significantly disrupted by COVID-19.

The new deal also lets British farmers benefit from a 15-year cap on tariff-free imports and enables them to increase exports.

"The leaders reaffirmed the enduring partnership between [Britain] and Australia during their discussion and agreed to work closely together on defense, technology collaboration and tackling climate change -- including through a future clean-tech partnership," the British government said in a statement Tuesday.

"Today marks a new dawn in [Britain's] relationship with Australia, underpinned by our shared history and common values," British Prime Minister Boris Johnson said in a statement. "Our new free-trade agreement opens fantastic opportunities for British businesses and consumers, as well as young people wanting the chance to work and live on the other side of the world."

"Our economies are stronger by these agreements," Morrison said, according to News.com. "This is the most comprehensive and ambitious agreement that Australia has concluded.

"The only one which comes into close connection with that is the arrangement we have with New Zealand under the closer economic relationship arrangements we have there."

World News // 2 hours ago
2 dead after British-operated oil tanker attacked in Arabian Sea
July 30 (UPI) -- An oil tanker came under attack off the coast of Oman in the Arabian Sea and led to the deaths of two European crew members, officials said Friday. 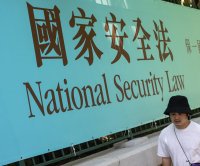 World News // 4 hours ago
Japan extends COVID-19 emergency for Tokyo, covers 4 new areas
July 30 (UPI) -- The Japanese government on Friday extended a state of emergency in Tokyo and made the declaration for four additional prefectures due to spiking COVID-19 cases, aided by he Delta variant.