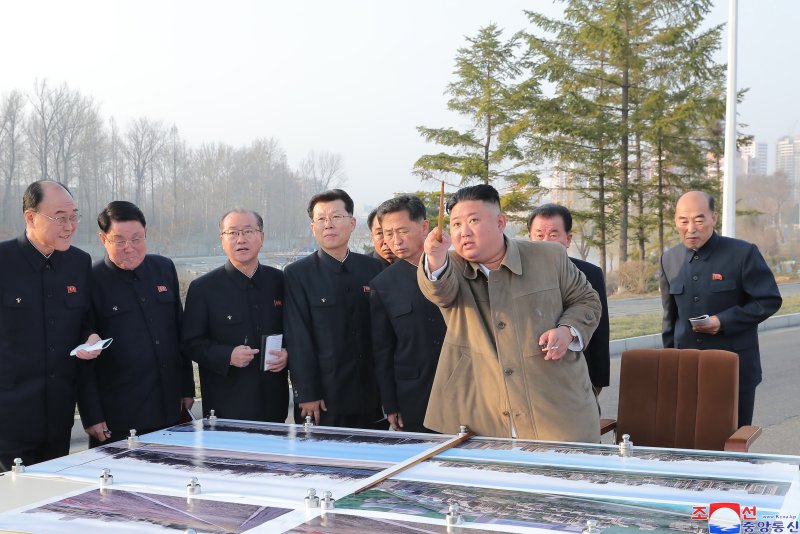 Workers' Party newspaper Rodong Sinmun reported Friday the construction is a "major project" of North Korea's Five-Year Plan that "carries out the decision of the Eighth Party Congress."

"Let us face accumulated difficulties and make continuous battle to build a new area for the people," the paper said. The Rodong also said that the "spirit of innovation, bold creation" have enabled workers to transform the district into a "modern area."

Kim Jong Un broke ground at the Pyongyang site in March. In previous, reports the Rodong said the military, including the Kim Jong Nam, Ri Kum Song, Kim Jong Kuk and Hong In Ryol army units were involved in the construction.

The North Korean leader has stressed the importance of rejuvenating the national economy, but recent events including the coronavirus pandemic have crippled recovery.

Sanctions mostly designed to curb nuclear weapons development also have been cited as an obstacle to delivering humanitarian aid and a key driver in raising the price of everyday goods, analysts have said.

Kim Byung-yeon, an analyst at Seoul National University, told the Wall Street Journal in May that Kim Jong Un is "trying to prove to North Koreans that he can still deliver a feat of engineering despite sanctions and the coronavirus."

"New modern apartments will be tangible proof to these people that the regime remains strong," the South Korean analyst said, according to the report.

Kim has promised in previous statements that he would create a "prosperous socialist country in which all the people enjoy happiness."

World News // 17 hours ago
U.S. diplomat elected to lead U.N. IT agency over Russian official
Sept. 29 (UPI) -- American Doreen Bogdan-Martin beat out a Russian official on Thursday, to become the next secretary-general of the International Telecommunication Union.

World News // 18 hours ago
Report: More than 1,700 environmental activists targeted and killed over the past decade
Sept. 29 (UPI) -- Nearly 2,000 environmental activists were systematically killed over the past decade for threatening to expose corruption in some of the world's most profitable industries, according to a new report by Global Witness.

World News // 20 hours ago
Queen Elizabeth II's cause of death confirmed as old age
Sept. 29 (UPI) -- Queen Elizabeth II died of old age, according to her death certificate, released Thursday in Scotland. She was 96.