The complaint, filed in 2019, accused Google of abusing its power in the online marketplace. File Photo by John Angelillo/UPI | License Photo

An investigation by the French Competition Authority said Google unfairly funneled business to its own services and the practice harmed competition.

The 2019 complaint accused Google of abusing its power in the online marketplace.

"These very serious practices have penalized competition in the emerging online advertising market, and have enabled Google not only to preserve but also to increase its dominant position," FCA President Isabelle de Silva said in a statement.

"This sanction and these commitments will make it possible to re-establish a level playing field for all actors."

"While we believe we offer valuable services and compete on the merits, we are committed to working proactively with regulators everywhere to make improvements to our products," Google France Legal Director Maria Gomri said in a statement.

"That's why, as part of an overall resolution of the FCA's investigation, we have agreed on a set of commitments to make it easier for publishers to make use of data and use our tools with other ad technologies."

World News // 16 hours ago
Sam becomes 7th hurricane of 2021 Atlantic season, could impact U.S.
Sept. 24 (UPI) -- Tropical Storm Sam has strengthened into a hurricane in the Atlantic and is projected to become a major hurricane in the coming days, forecasters said Friday.

World News // 3 hours ago
Kim Yo Jong, sister of Kim Jong Un, says North Korea open to dialogue with South
SEOUL, Sept. 24 (UPI) -- Kim Yo Jong, sister of leader Kim Jong Un, is calling the prospect of an end-of-war declaration on the peninsula "an admirable idea," and signaled that Pyongyang is open to dialogue if Seoul drops its "hostile" policies.

World News // 14 hours ago
Report: Britain paid compensation for nearly 300 Afghan civilian deaths
Sept. 23 (UPI) -- The British government paid $944,348 in compensation for the deaths of 86 children and 203 adult civilians at the hands of British forces in Afghanistan, according to a report released Thursday. 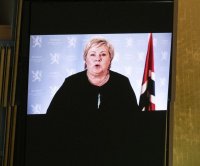