Scholar: North Korea is working to normalize its government 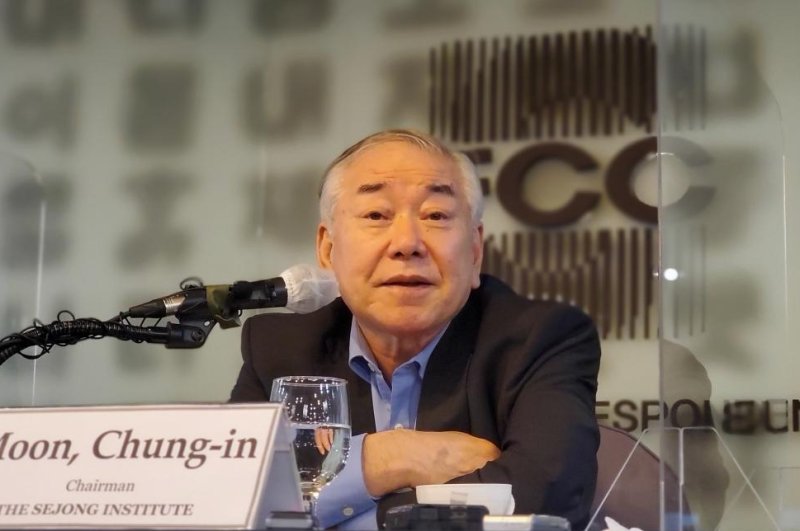 SEOUL, June 3 (UPI) -- Recent changes to official government policy by North Korea, including the creation of a new leadership role, are signs of a "process of normalization" in the secretive state, Moon Chung-in, chairman of South Korean think tank the Sejong Institute, said Thursday.

North Korea created a new "first secretary" position directly underneath leader Kim Jong Un during its Eighth Party Congress in January, South Korean news agency Yonhap reported this week. Kim used to hold the title of first secretary himself, but was elected to general secretary during the congress.

Moon Chung-in, who was previously a special adviser to South Korean President Moon Jae-in, said the creation of the role shows that Kim is working to reform the government as it deals with issues such as the coronavirus pandemic and severe economic difficulties.

"I don't think it's about power-sharing," Moon Chung-in said at a press briefing with international reporters in downtown Seoul. "It is the delegation of decision-making authority to the first secretary. It is a process of normalization of governance in North Korea."

The first secretary will be able to preside over key party meetings on behalf of Kim, according to reports. It is unclear who has been elected to the position, but the Yonhap report said sources point to Jo Yong Won, a close Kim aide and current member of the politburo.

Speculation has also revolved around the creation of the position as a way of addressing a succession plan for Kim.

Moon Chung-in highlighted the removal of belligerent language from the preamble of the Workers' Party of Korea's revised rules as another step toward normalization.

The preamble also dropped a statement that called for instigating revolution in South Korea as a means of unifying the peninsula, according to a report in South Korea's Hankyoreh newspaper.

Moon Chung-in called the recent changes "very positive developments in North Korea," and said they continued a trend of reforms that Kim Jong Un has undertaken, including attempts to modernize the economy through efforts such as the creation of special economic zones and updating foreign investment laws.

"One of the great misunderstandings of Kim Jong Un's North Korea is that he hasn't been working very hard to normalize things from an institutional point of view," Moon Chung-in said.

He added that it was a blindspot in the United States' understanding of North Korea.

"There are an array of institutional legal changes in North Korea, but Washington is not paying attention to the changes," he said. "They have a fixed view of North Korea."

Washington's nuclear negotiations with Pyongyang have stalled since a summit between then-President Donald Trump and Kim Jong Un in February 2019 ended without an agreement.

North Korea has also continued to spurn the South's efforts at improved relations, cutting off all direct communications and destroying a shared inter-Korean liaison office in its border city of Kaesong last June.

U.S. President Joe Biden met with Moon Jae-in in Washington last month, and the two leaders issued a statement that reaffirmed a commitment to "diplomacy and dialogue" with North Korea as a means "to achieve the complete denuclearization and establishment of permanent peace on the Korean Peninsula."

Moon Chung-in said he was optimistic that the meeting would help draw North Korea back to the negotiating table, with Pyongyang looking to resume talks with Seoul as a way to better gain insight into the Biden administration's intentions.

"It is likely we will have inter-Korean talks before we have another summit or contact between North Korea and the United States," Moon Chung-in said. "They want to better understand what President Biden is thinking about North Korea."

World News // 10 hours ago
Poland seeks restitution of 'stolen' Kandinsky painting sold at German auction for $400K
Dec. 3 (UPI) -- Poland's Ministry of Culture and Natural Heritage said it will take legal action and seek restitution after a Wassily Kandinsky painting allegedly stolen from the National Museum in Warsaw was sold at a German auction.

World News // 19 hours ago
French rail strike causes widespread weekend train cancelations
Dec. 3 (UPI) -- France's state state-owned railway company says it has canceled more than half of its scheduled trips this weekend due to a nationwide strike by rail conductors.

World News // 20 hours ago
Ukrainian police foil attempt to steal Banksy mural
Dec. 3 (UPI) -- Eight people who attempted to steal a mural by graffiti artist Banksy off the wall of a war-torn building in the Ukrainian city of Hostomel have been arrested, officials said Saturday.

World News // 21 hours ago
South African president Ramaphosa to run again despite corruption report
Dec. 3 (UPI) -- After previously signaling he would resign, South African President Cyril Ramaphosa confirmed on Saturday that he will not leave office and instead run for a second presidential term.