Israeli Prime Minister Benjamin Netanyahu is seen during a special session of the Knesset in Jerusalem, Israel, on Wednesday. Pool Photo by Ronen Zvulun/UPI | License Photo

June 3 (UPI) -- In his first remarks since the formation of a government coalition that appears likely to remove him from his post, Israeli Prime Minister Benjamin Netanyahu slammed the power-sharing alliance Thursday.

On Wednesday, opposition lawmakers said they have agreed to the power-sharing deal that would oust Netanyahu as prime minister in what would be Israel's first leadership change in more than a decade.

The coalition would first replace Netanyahu with Yamina Party leader Naftali Bennett, who would serve for two years before being succeeded by Yesh Atid Party leader Yair Lapid as prime minister.

The agreement needs full approval from the Israeli Knesset, but that could come within a couple weeks.

Thursday, Netanyahu called the conservative Bennett a traitor and his alliance with Lapid "dangerous," according to Haaretz.

The anti-Netanyahu coalition includes eight parties from the left to the far right. For the first time, it also includes an Arab party, the United Arab List, in the governing coalition.

Netanyahu said "all Knesset members elected by right-wing votes" should oppose the new coalition and attempted to paint Bennett as a "sell-out."

Ahead of the looming Knesset vote, Bennett has been given full prime-ministerial protection by the Israeli security force Shin Bet.

The coalition could end lingering political turmoil in Israel, which has staged several unsuccessful elections in the last two years. Following those elections, neither Netanyahu nor his opponents were able to put together a lasting coalition government.

Wednesday, Israeli politician Isaac Herzog was chosen to replace President Reuven Rivlin when he leaves office next month. Herzog's father was prime minister of Israel between 1983 and 1993.

World News // 10 hours ago
Several injured amid clashes during controversial flag march in Jerusalem
June 15 (UPI) -- Several Palestinian activists were injured Tuesday during clashes with Israeli security forces before and during a controversial right-wing march through Jerusalem.

World News // 14 hours ago
China rejects report of issues at Guangdong nuclear power plant
June 15 (UPI) -- China denied issues, including a gas leak at a nuclear power plant in Guangdong Province, after a recent report suggested that a company involved in operations warned of an "imminent radiological threat."

World News // 17 hours ago
U.S., EU agree to end 17-year dispute over subsidies for Boeing, Airbus
June 15 (UPI) -- The United States and the European Union on Tuesday ended a long dispute that lasted for nearly 20 years over government support for plane manufacturers Airbus and Boeing by agreeing to a five-year truce.

World News // 16 hours ago
Police deployed at South Korea THAAD base as U.S. seeks upgrades
June 15 (UPI) -- South Korea's military continues to deliver materials and equipment to the Terminal High Altitude Area Defense base in Seongju, as the United States aims to enhance interoperability of Patriot and THAAD systems.

World News // 17 hours ago
Britain signs 1st post-Brexit trade deal with Australia to cut out tariffs
June 15 (UPI) -- Britain on Tuesday brokered its first free trade deal since leaving the European Union 18 months ago by signing a what it called a historic new agreement with Australia. 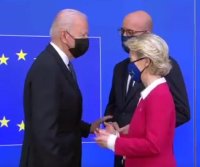 World News // 18 hours ago
'America is back': European Union leaders welcome Biden at EU-U.S. Summit
June 15 (UPI) -- U.S. President Joe Biden met in Belgium with the top leaders of the European Union on Tuesday to begin two days of diplomacy that will culminate with his first in-person sit down with Russian President Vladimir Putin.
Advertisement