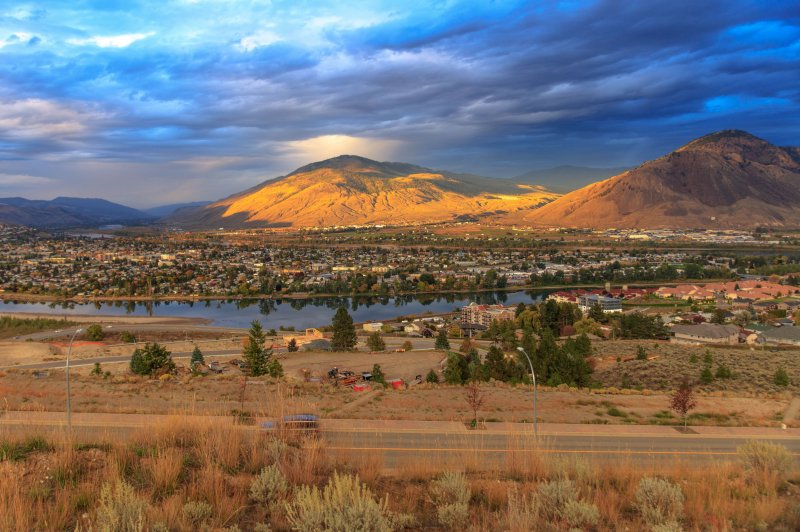 Kamloops, B.C., is seen in the late afternoon on September 26, 2016. Researchers found the bodies of 215 children buried at a First Nations residential school there, officials said Friday. Photo by Murray Foubister/Flickr

May 28 (UPI) -- The remains of 215 children buried at the site of the former Kamloops Indian Residential School have been uncovered, the Tk'emlupste Secwépemc First Nation said Thursday.

The Canadian government ran the school from 1890 to 1969 after taking over the administration of it from the Catholic Church to operate as a day school residence until closing in 1978.

The stunning find was confirmed last weekend near the city of Kamloops, on the southern edge of British Columbia.

"With the help of a ground-penetrating radar specialist, the stark truth of the preliminary findings came to light -- the confirmation of the remains of 215 children who were students of the Kamloops Indian Residential School," the Tk'emlúps te Secwépemc said in a statement. "Tk'emlúps te Secwépemc is the home community of the Kamloops Indian Residential School which was the largest school in the Indian Affairsresidential school system."

Richard Jock, CEO of the First Nations Health Authority, called the discovery "extremely painful" and said it will impact First Nation residents around the country.

"That this situation exists is sadly not a surprise and illustrates the damaging and lasting impacts that the residential school system continues to have on First Nations people, their families and communities," Jock said in a statement.

"The FNHA is calling on our stakeholders and health partners to work in concert to mobilize additional resources to support the Tk'emlúps community and others as circumstances unfold," Jock said.

Tk'emlúps Chief Rosanne Casimir said the buried bodies at the school had long been known to their community and the deaths have never been documented.

"Some were as young as 3 years old," Casimir said in a statement. "We sought out a way to confirm that knowing out of deepest respect and love for those lost children and their families, understanding that Tk'emlúps te Secwépemc is the final resting place of these children."

The Indian Residential Schools Settlement Agreement, implemented in 2007, was the largest class-action settlement in Canadian history. It established a Truth and Reconciliation Commission of Canada to facilitate reconciliation among former students, their families and their communities.

World News // 14 hours ago
EU promises new sanctions, Russian war crimes tribunal in Kyiv summit
Feb. 2 (UPI) -- European leaders gathered for a summit with Ukrainian officials in Kyiv on Thursday in an effort to address Ukraine's repeated calls on the international community for more assistance to fend off Russia.

World News // 20 hours ago
Defector Thae Yong-ho: South Korea should have its own nukes
SEOUL, Feb. 2 (UPI) -- Thae Yong-ho, the high-profile North Korean defector who became a politician in South Korea, said Thursday that Seoul should develop its own nuclear weapons despite Washington's promise of extended deterrence.
Advertisement