Hundreds of thousands evacuated as cyclone bears down on India

Waves crash ashore during high tide in the Bay Of Bengal before Cyclone Yaas arrives in Digha, south of Kolkata, eastern India, on Tuesday. Photo by Piyal Adhikary/EPA-EFE

May 25 (UPI) -- Cyclone Yaas churned closer to northeastern India on Tuesday as hundreds of thousands of residents in the COVID-weary country fled their homes to find safety. The formable cyclone in the Bay of Bengal was approaching the country as recovery efforts continue after western parts of India were ravaged by Cyclone Tauktae, one of the strongest storms on record for the Arabian Sea, last week.

The COVID-19 death toll in India surged past the 300,000 mark on Monday, making the country just the third in the world to reach the grim milestone. Only the United States and Brazil have recorded more fatalities throughout the duration of the pandemic. According to Reuters, 100,000 of those fatalities have occurred over the last three weeks amid a hard-hitting second wave.

Government officials were calling on farmers to cancel a mass protest set to be held outside of New Delhi, the capital, over fears that it could turn into another super spreader event. Health officials have blamed political rallies and religious gatherings for exacerbating the second wave surge of cases.

Vaccinations and needed COVID relief efforts could once again be interrupted due to the looming presence of Cyclone Yaas.

As of early Wednesday morning, Yaas was a very severe cyclonic storm with sustained wind speeds of around 75 mph and was located about 86 miles south-southeast of the coastal city of Paradeep, located in the state of Odisha. The storm is expected to make landfall by the middle of the week.

"This type of storm is always a concern due to the susceptibility of this part of India to serious storm surge/coastal inundation as well as flooding from rainfall as well as wind damage, especially closer to the coast," said AccuWeather senior Vice President and chief meteorologist Jonathan Porter. "However, I am concerned this can easily and quickly become a humanitarian crisis due to the existing COVID-19 disaster." 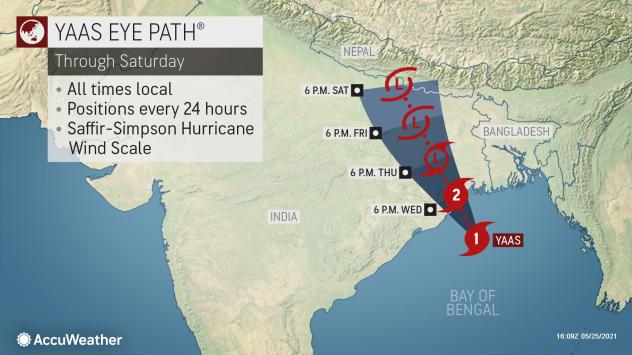 On Sunday, the India Meteorological Department announced a well-marked area of low pressure had strengthened into a deep depression over the Bay of Bengal. The storm strengthened into Cyclonic Storm Yaas on Monday morning, local time, according to the IMD.

By Tuesday evening, Yaas reached severe cyclonic storm in intensity and was equivalent to a Category 1 hurricane on the Saffir-Simpson Wind Scale used in the Atlantic and Pacific basins.

Prime Minister Narendra Modi called for the timely evacuation of those involved in offshore activities as he chaired a high-level meeting to review the preparedness of states and central government agencies to deal with the situation arising out of the budding cyclone on Sunday.

Some residents forced to evacuate in West Bengal are still trying to rebuild after Cyclone Amphan, the most powerful storm in more than a decade to hit eastern India, made landfall in the Indian state last year.

India's National Disaster Response Force Director, S.N. Pradhan, announced that thousands of emergency personnel have been deployed to the coastal regions of Odisha and West Bengal to assist with evacuations and any possible rescue operations, The Associated Press reported.

Naveen Patnaik, the chief minister of Odisha, urged residents moving to cyclone shelters to wear double masks and to practice social distancing. He added, "We have to face both the challenges simultaneously." 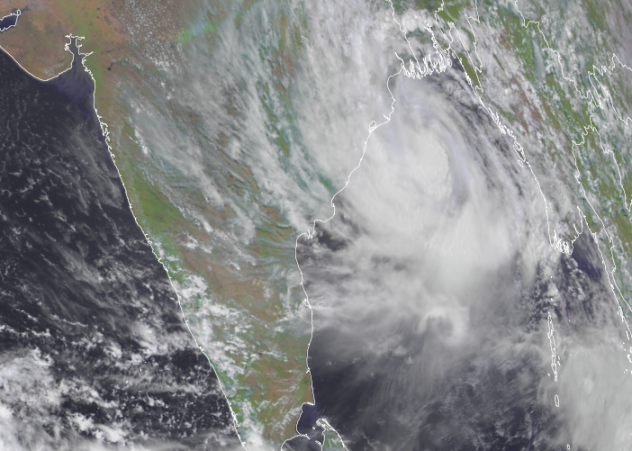 According to the Press Trust of India, the Kolkata Port will suspend all shipping movements on Tuesday as Yaas nears northeastern India.

The Kolkata International Airport will suspend all operations throughout the day Wednesday, and the Northeast Frontier Railway canceled all southbound- and Kolkata-bound passenger trains through Saturday.

The most likely location for landfall to occur is near or just east of Paradeep, a city along the coast northern Odisha on Wednesday, according to AccuWeather lead international meteorologist Jason Nicholls.

"At landfall, the cyclone could be a very severe cyclonic storm," added Zartman. This is equivalent to a Category 2, or perhaps 3, hurricane on the Saffir-Simpson Hurricane Wind Scale used in the Atlantic and East Pacific basins.

As the tropical cyclone pushes inland across northeast India, it can bring widespread rainfall totals of 2-4 inches to the Indian states of northeast Odisha, West Bengal and Bihar, as well as portions of Nepal and Bangladesh.

As of 9 a.m. Tuesday, at least 6.34 inches of rain have fallen over a 24-hour period at Paradeep, India, in bands ahead of the storm.

Along the track of the storm, rainfall totals can climb as high as 8-12 inches with an AccuWeather Local StormMax™ of 24 inches most likely in this area. 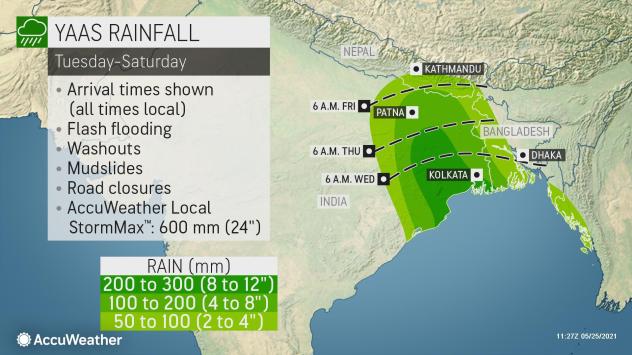 Flash flooding, mudslides and washouts are all possible with this amount of rainfall in such a short period of time.

In addition to flooding rain, areas along the coast of West Bengal and Bangladesh will also have to contend with storm surge as strong onshore winds push water inland as the storm arrives.

Winds can gust as high as 100-120 mph as the storm moves onshore. An AccuWeather Local StormMax™ of 125 mph is expected near or just east of where the storm makes landfall. 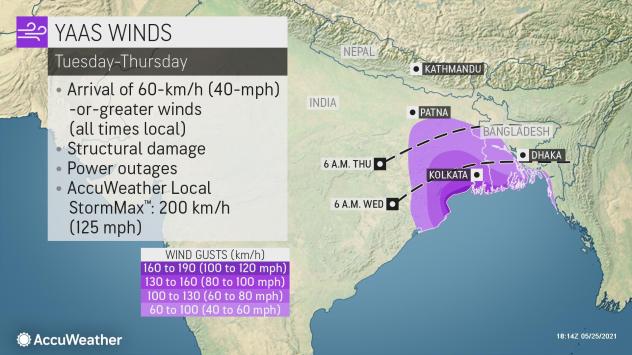 Strong wind gusts can lead to the damage of homes and buildings as well as power outages.

Due to the expected heavy rain, flooding, strong winds and storm surge, this budding tropical system is a 4 on the AccuWeather RealImpact™ Scale for Tropical Cyclones.

Depending on the exact track of the storm, Kolkata, West Bengal, may be in the crosshairs of some of the strongest impacts from Yaas. The city is India's third-largest with 14.1 million residents in the metropolitan area and a major port and economic hub for northeast India. 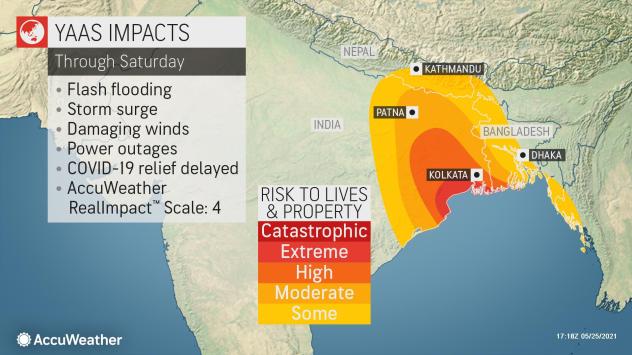 "Also, less than 10% of the residents of this state are fully vaccinated against COVID-19, so this cyclone is going to have a major impact on testing, treatment and vaccine distribution," he added.

Additionally, mucormycosis, informally known as "Black Fungus," is increasingly cropping up across India, and Kolkata has recently reported its first cases of the fungal infection.

This storm will likely put additional strain on the recovery efforts for this illness, especially since this fungus grows in extremely moist environments which will likely be exacerbated by this tropical cyclone, warned Porter.

After the storm moves inland and interacts with land, it will begin to lose wind intensity. By Friday, it is expected to transition into a tropical rainstorm before being ripped apart by the Himalayan Mountains in Nepal over the weekend.

Western India is still recovering from a direct hit from Tropical Cyclone Tauktae, which made landfall less than a week ago on the Kathiawar Peninsula of Gujarat.

At least 122 deaths are being blamed on the cyclone, including 37 crew members from the barge that sank off the coast of Mumbai, according to the Times of India.

Biden to double federal funding for hurricane preparedness in U.S.