May 5 (UPI) -- North Korea is preparing to receive deliveries of COVID-19 vaccines from the World Health Organization's COVAX facility amid delays, according to the WHO.

Edwin Salvador, head of the WHO office in Pyongyang, said Tuesday that North Korea is "in the process" of complying with the technical requirements needed to obtain COVID-19 vaccines, Radio Free Asia's Korean service reported.

In February, a list from COVAX showed North Korea was to receive 1,992,000 doses of COVID-19 vaccines. The AstraZeneca vaccines from the Serum Institute of India are enough to cover 996,000 people. By March, that number was adjusted to 1,704,000.

Salvador said the WHO is coordinating with the North Korean government.

According to RFA, Salvador had said in April the vaccines initially were to be supplied to North Korea "before May 2021," but delays have prevented the doses from reaching the isolated country. Delays have affected all recipient nations, however, Salvador reportedly said.

The WHO stated in its Southeast Asia Region Weekly Situation Report for Week 16 that North Korea continues to report "no cases."

"These include 693 persons who were tested during the period of April 16 to April 22," the report said.

The WHO also said 112 people tested were subjects with "influenza-like illness" or "severe acute respiratory infections."

The WHO does not have direct access to the North Korean population.

World News // 9 hours ago
Japan rejected summit with South Korea at G7, citing 'unsuitable conditions"
June 14 (UPI) -- Japan's prime minister may have snubbed South Korean President Moon Jae-in and rejected an invitation to a bilateral summit on the sidelines of the G7 summit in Cornwall, according to Japanese press reports. 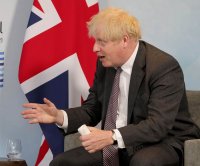