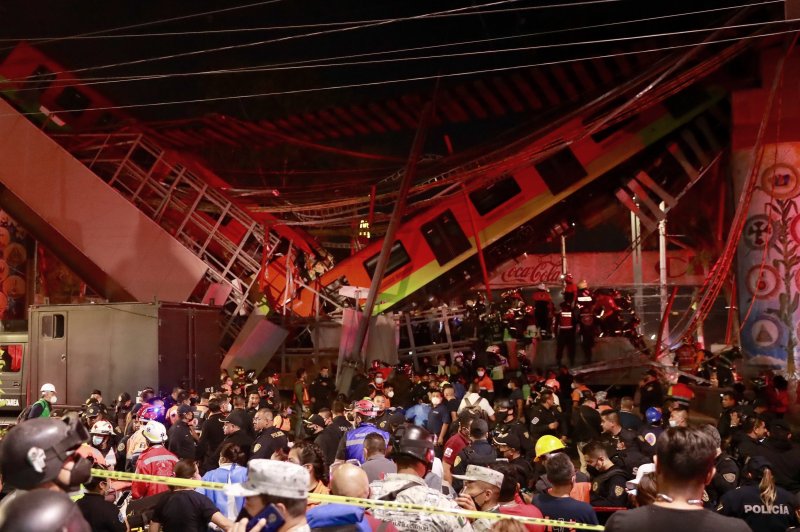 At least 23 people died when an overpass on the elevated track of Line 12 of the Mexico City subway system between Olivos and Tezonco station collapsed Monday night. Photo by Carlos Ramierz/EPA-EFE

May 4 (UPI) -- At least 23 people were killed and dozens more were injured in Mexico City on Monday night when an overpass collapsed causing a subway train to plummet to the ground, officials said.

Mexico's civil protection agency said the derailment occurred on Line 12 near Olivos Station in southeast Mexico City. By Tuesday morning, emergency teams said they were attempting to recover the bodies of four victims trapped in the wreckage, according to The New York Times.

Mexico City Mayor Claudia Sheinbaum announced the death toll early Tuesday via Twitter, stating a structural review of the entire line and an in-depth investigation into the causes of the derailment would now begin.

"We will report with all the truth," she said. "Our support to all victims."

The Secretary of Comprehensive Risk Management and Civil Protection said 79 people were transferred to several local hospitals. All the injured had been extracted from the rubble, it said.

The government said preliminary numbers show around 70 people were injured. Officials have since identified those hospitalized, some of whom are minors as young as 15.

"We regret the loss of life," Sheinbaum tweeted after having rushed to the site.

The Times reported that cracks had appeared in the concrete of the overpass aver a strong 2017 earthquake in the city. Hernando Manon, a nearby resident, told the newspaper he noticed the cracks had been removed since then.

The city's attorney general's office said experts in photography, criminology, land traffic and other areas had also arrived at the scene.

"Of course, causes must be investigated and responsibilities defined," he tweeted. "I reiterate myself at the entire disposal of the authorities to contribute in whatever is necessary."

"We send our condolences to the families of the victims of this accident," he said.

The civil protection agency said rescue work was underway early Tuesday with some 450 police officers and 90 paramedics at the scene.