A North Korean vessel underwent a safety inspection at the Chinese port of Yantai, according to data from the Port State Control Committee of the Asia-Pacific. File Photo by Stephen Shaver/UPI | License Photo

Data from the Port State Control Committee of the Asia-Pacific showed the North Korean ship Ryon Hwa 3 was inspected at the Chinese port of Yantai on March 28, Voice of America's Korean service reported.

North Korean ships Minhaeho, Long Reach 5, and Jasong 2 were seen either entering or about to enter the Chinese ports of Longkou, Dalian and Shidao.

Other vessels, including the Taepyongsanho and the Jaryokho, were seen near the Chinese port of Weihai, according to VOA.

North Korean activity at sea could be resuming amid the coronavirus pandemic, but the regime remains on guard at its border with China.

RELATED Strategic command: U.S. 'ready for just about anything' from North Korea

Lu Chao, a Chinese analyst at the Liaoning Academy of Social Sciences, said last week that North Korea could be seeking to import fertilizer, tractors and other farm equipment for spring seeding season.

The food supply could be a critical issue for North Korea.

Last week, North Korean newspaper Minju Chosun said the intention of the Korean Workers' Party is to "completely solve" the "food problem" in the country.

World News // 12 minutes ago
China exempts 79 U.S. products from further tariffs
May 17 (UPI) -- China said it would extend tariff exemptions on goods from the United States and Canada. 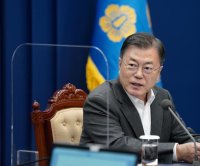 World News // 4 hours ago
South Korea's Moon Jae-in: 'Vaccine cooperation' on the agenda for Biden summit
SEOUL, May 17 (UPI) -- South Korean President Moon Jae-in said Monday that he will use his trip to Washington this week as an opportunity to shore up the country's vaccine supplies.

World News // 4 hours ago
Israel strikes Hamas tunnels in Gaza amid global calls for cease-fire
May 17 (UPI) -- Israel continued its barrage of airstrikes into Gaza overnight and into Monday as fighting with Hamas entered its second week despite repeated calls for a cease-fire from the international community. 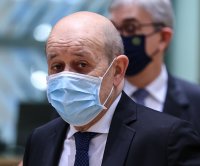 World News // 19 hours ago
COVID-19 worldwide deaths decline 12%, cases 4% in past week
May 16 (UPI) -- Coronavirus deaths and cases are stabilizing throughout the world with the exception of India where nearly 27,000 people have died and 2.7 million more become became infected.

World News // 17 hours ago
Two dead, more than 100 hurt in bleachers' collapse at Israeli synagogue
May 16 (UPI) -- At least two people were killed and 167 were injured after bleachers collapsed at a crowded synagogue in the town of Givat Ze'ev on Sunday.

World News // 1 day ago
Coronavirus surging in India with 400,000 daily cases, 4,000 deaths
May 9 (UPI) -- Coronavirus is continuing to surge in India as daily cases surpassed 400,000 on May 9 for the fourth day in a row and deaths were above 4,000 for back-to-back days in the nation as the pandemic is subsiding elsewhere in the aftermath of restrictions and ramped-up vaccines.