Debate grows in South Korea over women and the military

South Korea’s military service law requires men but not women to serve for about 20 months. Seoul’s defense ministry said “social consensus” is needed before changes are made, according to a local press report on Tuesday. File Photo by Yonhap/UPI

April 20 (UPI) -- A South Korean petition that has collected more than 140,000 signatures is demanding women in the country be required to perform compulsory military service as debate intensifies over current policy.

The petition, "Please include women in [military] conscription," was uploaded on Friday, Newsis reported. The government is required to address any petition that gathers more than 200,000 signatures in 30 days.

South Korean law requires men between ages 18 and 28 to report to the military for about 20 months of service. In 2010, 2011 and 2014, the nation's Constitutional Court upheld a law that requires only men to serve in the military.

Attitudes toward gender and the military are changing in the country, however.

According to Korea Women's Development Institute, more than half of women, or 53.7%, who responded to a survey in 2019 said they agree women should be required to report to military duties.

Democratic Party lawmaker Kwon In-seok said on a local radio show that the male-centric conscription system is a "major source of gender bias through a woman's working life," referring to instances of discrimination against women in workplaces because of their lack of military experience.

Seoul is approaching the issue cautiously.

"I do not think it is appropriate to give a definite answer," the South Korean spokesman said.

Boo also said he would not comment about a potential "volunteer military system," a topic that has become widely discussed after the publication of a new book.

The book by Democratic Party lawmaker Park Yong-jin, proposes replacing the draft with a voluntary system that require men and women to receive basic training for up to 100 days, according to Yonhap on Tuesday.

World News // 4 hours ago
China rejects report of issues at Guangdong nuclear power plant
June 15 (UPI) -- China denied issues, including a gas leak at a nuclear power plant in Guangdong Province, after a recent report suggested that a company involved in operations warned of an "imminent radiological threat."

World News // 7 hours ago
U.S., EU agree to end 17-year dispute over subsidies for Boeing, Airbus
June 15 (UPI) -- The United States and the European Union on Tuesday ended a long dispute that lasted for nearly 20 years over government support for plane manufacturers Airbus and Boeing by agreeing to a five-year truce. 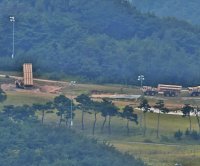 World News // 8 hours ago
'America is back': European Union leaders welcome Biden at EU-U.S. Summit
June 15 (UPI) -- U.S. President Joe Biden met in Belgium with the top leaders of the European Union on Tuesday to begin two days of diplomacy that will culminate with his first in-person sit down with Russian President Vladimir Putin.